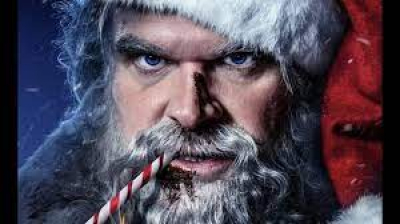 It’s Christmas Eve and where is Santa Claus (David Harbour)? He is sitting at a bar getting drunk regretting the fact that he has to fly around the world spreading joy and good will, oh and presents of course for the good little girls and boys. Life for Santa has not been as good as he wants it to be always wondering why he is Santa and not actually knowing how all his tricks of being Santa work. But off he goes for a night of flying through the skies. Thankfully the reindeer are not drunk!

Things take an awful turn for Santa when he arrives at the Lightstone estate. You see, the Lightstone family is extremely wealthy and Gertrude Lightstone (Beverly D’Angelo) a very stern mother of two children does not take flack from anyone. At least not until now when a group of thieves led by Scrooge (John Leguizamo) raid her estate demanding the money kept in her downstairs vault. Almost everyone on the premises gets killed in multiple fashions, while Gertrude’s daughter Alva Lightstone (Edi Patterson) her husband action movie star Morgan (Cam Gigandet) their son Bert (Alexander Elliot) along with son Jason Lighthouse (Alex Hassell) his wife Linda (Alexis Louder) and their daughter Trudy (Leah Brady) are hostages in the family room.

It just so happens that Santa is visiting the home at the time of the take-over and he finds himself also fighting to stay alive and helping Trudy and her family survive. Well from this moment on the Santa we all love and adore has found his dark side and decides to kill all of the intruders which are many. Good ole Saint Nick can really kick butt and he proves it against the bad guys.

I absolutely loved this movie, it is a mixture of “Die Hard” meets “Home Alone” but mostly more fights, explosions, pain, death, silliness and gore with both comedy and Christmas cheer mixed in. This is truly not a Santa Claus movie to take your kids to but I could watch it several times for sure. Great Direction and writing along with a lot of kick ass action. This film is perfect right from the very beginning with Santa in the bar to the very end of he and his reindeer.

Harbour is awesome in this film bringing death and joy to everyone on Christmas Eve. One thing for sure you want Santa on your side this holiday season so you better be nice and not naughty. Hats off to Harbour for being the perfect violent yet sweet Santa Claus. D’Angelo is spot on playing the rich snob that cares more about her money and estate then her own family. Brady took over as the little girl who believes in Santa and can still be good while fighting the bad guys in her “Home Alone” ways. Leguizamo, Eriksen, Suri, Patterson, Gigandet, Louder and Hassell all contributed to a brilliant action filled “Violent Night” for all to see. What do you want for Christmas? If nice a present but if naughty it could be coal or Santa’s mighty hammer. Ho Ho Ho

More in this category: « Devotion The Son »
back to top

We have 112 guests and no members online