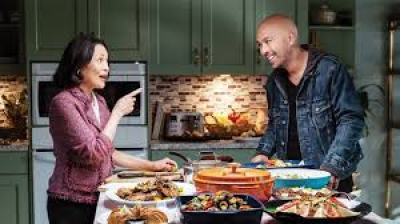 Joe Valencia (Jo Koy) is a stand-up comedian in Los Angeles who has made more fame from doing a beer commercial then his comedy. He is divorced with one son, Junior (Brandon Wardell), who he takes on a road trip to visit Joe’s mother Susan (Lydia Gaston) for the Easter holiday with their extended family. Tita Theresa (Tia Carrere) who is fighting with Susan as always, Tita Yvonne (Melody Butiu) Karaoke happiness, Tito Arthur (Rodney To) the relative that is always packing, Eugene (Eugene Cordero) Tita Theresa’s son that always seems to find trouble this time worth $40,000, Regina (Elena Juatco) and a few others.

Junior was not thrilled about the journey, that is until he meets Ruth (Eve Noblezada) who changes his mind about missing LA about 4 hours away. The story follows Joe and his adventures with all his family members but mainly his mother and the fact that Eugene got Joe in trouble for a lot of money. If they don’t come up with the money owed Dev Deluxe (Asif Ali) and his henchmen, they are going to take out his frustrations not only on Joe and Eugene but their families as well. The race is on to come up with the money they owe but even a visit to Lou Diamond Phillips doesn’t help their cause. Meanwhile, Joe is arguing with his manager (Jay Chandrasekhar) about landing a new role in an upcoming series while dealing with his family and killers. Life for Joe Valencia always seems to have its ups and downs but other than comedy mostly downs.

I enjoyed the movie but honestly would not have cared if I missed it. The comedy was not all that funny as they poke fun at the Philopena family. There were a few bad edits in the film along with the lack of some character development. The music was good and the photography worked out but maybe because I did not know this comedian it lacked a bit more interest on my behalf. Some people were laughing in the audience loudly but I at times struggled to understand why.

Koy works hard to sell his character but at times maybe a bit too hard. I did enjoy Gaston as I found her to be spot on with her character. Wardell and the relationship with Noblezada were a decent distraction but I still found the story a bit off even with the use of a cameo by Phillips. To had some interesting moments as does Deluxe but it is Cordero that seems to steal most of his scenes. The rest of the cast helps move the story but still at times it just tended to fall a bit flat. Maybe some animals in the story would have added a bit more interest and likability at least on my behalf.

More in this category: « Thirteen Lives Beast »
back to top

We have 170 guests and no members online