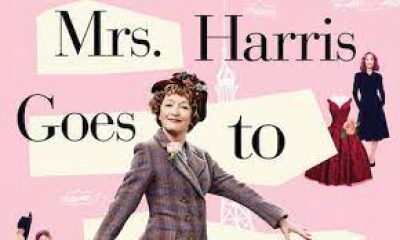 This re-made film one might say is a reflection of a “Cinderella” story. Ada Harris (Lesley Manville), who at times reminded me slightly of the great Betty White, is a widower living in London cleaning homes for a living. She has an excellent friendship with Vi Butterfield (Ellen Thomas) and a gentleman friend named Archie (Jason Isaacs) a typical man that likes other women as well. She was a life-saver at times and somewhat of a friend more than a house cleaner to Pamela Penrose (Rose Williams) a struggling want to be actress.

It wasn’t until she was cleaning another home for a client named Lady Dant (Anna Chancellor) a woman bent on fame and money, did Ada see a new dress in her closet. A dress worth a lot of money and designed by Christian Dior. It was at that moment Ada knew that she wanted to fulfill her dream of owning her own Dior dress. After saving money and with a little help from above Ada was off to Paris. Once there she did a lot of walking but eventually made it to the doors of Dior. One look at Ada and the Dior doors were closed but Ada was persistent as always and somehow like so often the pieces to her puzzle seemed to fall right into place. With a purse filled with money and a drive that doesn’t quit they accepted Ada to attend the private Dior fashion show with a little help from her new friend Marquis de Chassagne and Andre Fauvel (Lucas Bravo) who worked closely with manager Claudine Colbert (Isabelle Huppert) and Dior himself.

Eventually Ada got what see wanted which was to be measured for a Dior dress and she even made another friend with a model named Natasha (Anna Baptista) along with Marquis de Chassagne (Lambert Wilson). Ada seemed to have a lot of luck following her around but it wasn’t all what Ada received, in the end she changed lives and the history of Dior.

I loved the film and I thought the director did a wonderful job with this story and thanks to the writers as well. The story is sweet and filled with delight leaving the audience filled with a warm heart and the feeling that whoever you are or wherever you live it is possible in one way or another for dreams to come true. Not a huge cast but one that molds together to make a much worthy film especially for the older crowd and the dreamers.

Manville reminded me so much at times of a young Betty White and her personality is filled with likeable by the audience and I’m sure the cast. Isaacs is that near but distant friend that always turns out when you truly need him. Williams a dreamer herself but does not truly care about others. We have all come across the character of Chancellor I’m sure as well as Wilson but it is good to know friends like Thomas, Baptista and Bravo really exist out there in the world. No animals appeared in this film to my recollection!

More in this category: « Where the Crawdads Sing Nope »
back to top

We have 131 guests and no members online