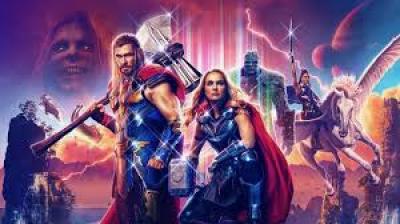 Walt Disney Pictures, Marvel Studios and Fox Studios Australia present a 119-minute, PG-13, Action, Adventure, Comedy, directed and screenplay by Taika Waititi, story by Jennifer Kaytin Robinson and based on the Marvel comics by Stan Lee with a theater release on July 8, 2022.

A man is walking through a desert, no food or water, high winds filled with sand belt his body like bullets from a machine gun but the man is not alone, he travels with his young daughter. He prays to the Gods to save his daughter who is on death’s door but no God answers and his daughter dies. Yet, when he buries her, he is soon thereafter is lead into an oasis, a jungle filled with trees, water and fruit, where one God waits for him, treating him like a fool. This man is no fool but rather a man filled with rage for the death of his daughter and no help from the so-called God’s. This man becomes Gorr the God Butcher (Christian Bale), out to revenge his daughter’s death, using the black sword to kill all God’s for not hearing his plea.

So, Thor (Chris Hemsworth) comes out of retirement to help some friends conquer a battle, yet this time without his hammer but rather more of a long-armed ax. His Hammer has been broken to pieces and is on display for all tourists to see in the New Asgard. As usual though Thor is a bit of a show-off in battle along side others like his friend Korg (voice of Taika Waititi), Star-Lord (Chris Pratt), Rocket (voice of Bradley Cooper), Nebula (Karen Gillan), Mantis (Pom Klementieff), Groot (voice of Vin Diesel) and Drax (Dave Bautista).

Yet back on earth Jane Foster (Natalie Portman) is very sick and doesn’t have much life left in her body but when she gets a calling to visit Thor’s hammer on display, she soon becomes the Mighty Thor and joins her ex-boyfriend to bring Gorr the God Butcher to his knees. She, Thor, Valkyrie (Tessa Thompson), Korg, and two crazy screaming goats come together later in the story to save the towns stolen children and to stop Gorr. Not without a stop to visit Zeus (Russell Crowe) though to seek the use of his lightning bolt but that didn’t go as planned. In the end, the battle is fierce but one wish gets granted but albeit will it be the right wish used for the good of all man and God’s? That you will have to see for yourselves!

I know Marvel lovers looking for a serious journey by Thor and his friends may be a bit disappointed but hell I am not. I thought the film was funny, exciting, serious, thoughtful, romantic, silly yet perfection wrapped all in one two-hour package. Waititi is brilliant with his direction and writing making this story a true adventure from beginning to end and I mean right to the end so stay through all the credits. A superb score, costumes, and photography only enhance this film that is beautifully acted by a great cast.

Hemsworth is spot on both funny and a serious super-hero all wrapped up in one. Ladies be prepared during the scene with Zeus you will get an eyeful of Chris in his birthday suit and it wasn’t even his birthday! Portman pulls off lady Thor as well as a great support to Hemsworth’s character. Thompson and her white flying horse is epic and all of the other main or supporting actors were phenomenal. I must say though Bale once again becomes his character to its core and is brilliant all the way through the story. This is a must-see film for all and truly I would like to see it again because there is so many little details to miss. As for animals in the story the horse was gorgeous and well represented and as for the goats well, they were a bit annoying but spot on. I can’t forget Rocket he is just kick-ass cool.

More in this category: « Minions: The Rise of Gru Where the Crawdads Sing »
back to top

We have 139 guests and no members online