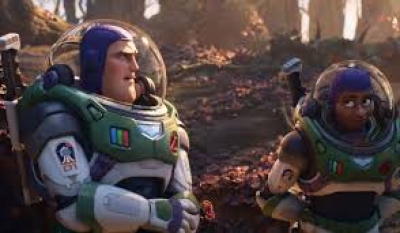 So, this is totally not a “Toy Story” film but rather the story of Buzz Lightyear before he became an action figure in the “Toy Story” franchise. Buzz Lightyear (voice of Chris Evans) was set on breaking the speed of sound as an astronaut and his fellow astronaut and best friend Alisha Hawthorne (voice of Uzo Aduba) was his best friend to “Infinity and Beyond”. But it seems that every time he returned from space trying to complete the journey at 100% breaking the sound barrier, he would not age but the people left behind have all aged four or more years. Each journey he eventually watched Alisha get older, marry her girlfriend, have a son and later a grandchild who grew up as Izzy Hawthorne (voice of Keke Palmer) who ended up working with Buzz.

It seems Buzz created a huge wrong and needed to make it right and with the eventual help of some other characters, Darby Steel (voice of Dale Soules), Mo Morrison (voice of Taika Waititi) and the gift he received from Alisha at one point in his journey Sox the cat (voice of Peter Sohn). On a planet dealing with huge bugs and live terrorizing plants, Buzz knows the only way of saving the people on the planet is to break the barrier and maybe turn back time but not all things go as planned especially when he battles Emperor Zurg (Voice of James Brolin). Yet with his inner strength and the help of some friends and a smart kitty, Buzz and the group give a great fight to come up on top.

Ok so first, I loved the cat character and the story including direction is very well done. I thought it got a bit boring for a few minutes in the middle but that aside the photography and animation is superb as only Disney and Pixar can do. I would have enjoyed a bit more levity that Disney and Pixar are known for and with the little old law-breaking lady and the robot cat they missed their chance of making it more humous and light. It is a dark story to a degree but I’m sure the younger generation will love it and yet as an older person I missed some of the Disney magic to make you laugh. Ironically the story at times was a mirror image with the story of the new “Top Gun Maverick” film now out in theaters and making a ton of money. I assume Lightyear will do well at the box office as well mainly because of the Disney character Buzz Lightyear and the action he encounters with his friends. As for animals, the cat is robotic and awfully cute and the bugs well they are huge and deadly.

More in this category: « Jurassic World Dominion Elvis »
back to top

We have 653 guests and no members online