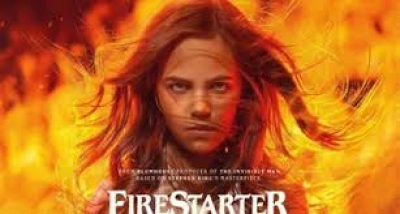 Andy McGee (Zac Efron) met his wife Vicky (Sydney Lemmon) while part of experiments at DSI. It seems they both have special powers beyond the normal world. When they have a child, Charlie (Ryan Kiera Armstrong) her powers begin to show up as she begins to get older. At school her classmates hate her and bully her which takes all of her inner being to not hurt them with fire created from her body.

Once anyone finds out about their powers or they become noticeable or on the local news the family must move on to another location running from Dr. Joseph Wanless (Kurtwood Smith) and Captain Hollister (Gloria Reuben) from the DSI corporation. It’s not until Captain Hollister brings out a patient to do her dirty work, Rainbird (Michael Greyeyes), he stops at nothing to kidnap the girl even if her parents get in the way.

I had the chance to watch this screening in the comfort of my own home which at times I like but this film to start off was a bit irritating since it seemed to have a bit of fog over the picture. Usually for security purposes it’s my name which I prefer. Anyway, there is not much I liked about this film, it is badly directed with so many stop and go segments I waited for commercials to kick in and as for the writers, wow not good, it was a bit all over the place like the direction. Even the CGI and actual fire scenes were weak and the score to me I had trouble paying attention to it.

As for the acting it is kind of a bad casting call. Efron is about the only one that does a decent job and that doesn’t say much. Lemmon is a bit lackless and unimportant plus needs a bit more experience in front of a camera. Rueben is stiff and over-imagined as a bad guy and Smith might have been a bit better but has a short role. As for Armstrong she does remind me of Drew Barrymore from the original in many ways and at least the youngest of all the actors is the one that does the best job on the screen. I must say I did not like the scene with the dumpster cat and though they tried to make it right in the end it was still extremely wrong and cruel.

More in this category: « Doctor Strange in the Multiverse of Madness Men »
back to top

We have 306 guests and no members online