Doctor Strange in the Multiverse of Madness Featured 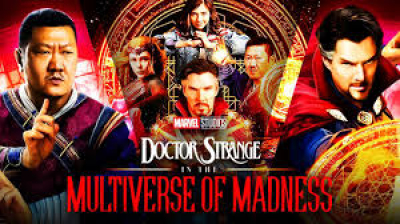 Movie Review Written by Jon Patch with 3.5 out of 4 Paws

Doctor Strange in the Multiverse of Madness

Doctor Stephen Strange (Benedict Cumberbatch) has an encounter with a large one-eyed creature that is destroying the neighborhood as it tries to kill a young girl, America Chavez (Xochitl Gomez). Unaware of why this monster is after the young girl, Strange with the help of Wong (Benedict Wong) are both fighting furiously to help the girl. Once the story comes out, they discover that America is able to travel through the multiverse of her other lives.

With her help, Strange is able to uncontrollably travel with her into other lives and in his travels he encounters the woman he loves Dr. Christine Palmer (Rachel McAdams) and begins to discover why he can never seem to commit to a relationship with her. But not everything is a journey but rather turns into a war when Wanda Maximoff (Elizabeth Olsen) decides she wants the power to travel the multiverse so that she can live the life when she is with her two children. This is when the war games begin because the Scarlet Witch is stopping at nothing to take America’s powers. Yet America doesn’t even realize the strength that she holds inside and the power she has to fight the Scarlet Witch. Albeit when the fight begins of many including Sara (Sheila Atim) against the Witch life whether this one or another is what is meant to be or is it!

I loved the movie and director Raimi once again performs a true fantasy that takes us on a journey of reality or what ifs. Well written the film is filled with twists and turns that may confuse you a bit but in the end all comes together. Phenomenal special effects and CGI keeps you amazed on the perfection of film making along with the wonderful music and the amazing wardrobes.

Cumberbatch is awesome as always when he plays Doctor Strange although I missed a bit more of his wit that was covered up with a bit more dramatic seriousness. Olsen is superb playing two characters, Wanda and the Scarlet Witch showing both anger and sympathy wanting one life over another but realizing the truth in the end. Nice first job as a super-hero, Chavez is a welcomed new addition to the Marvel family. Big fan of McAdams she does a nice job as does Wong who plays a sidekick to Strange. I can’t think of any animals in the story so no report to say how they were perceived but overall, you will like the film especially if you are a Marvel phonetic.

More in this category: « The Unbearable Weight of Massive Talent Firestarter »
back to top

We have 274 guests and no members online