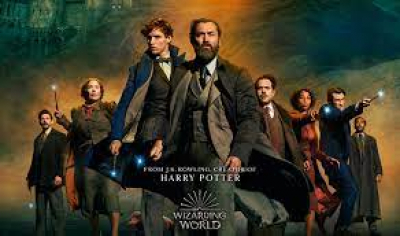 I almost felt at one point in the story that I was watching the 2020 American election! Anyway, it seems the election is upon them for control of the wizarding world and Professor Albus Dumbledore (Jude Law) is not about to sit by and let the powerful dark wizard Gellert Grindelwald (Mads Mikkelsen) take the election unfairly. So, Professor Albus pulled together a team to stop Grindelwald, which included Newt Scamander (Eddie Redmayne) and his traveling suitcase, Newt’s brother Theseus (Callum Turner), the witch Eulalie ‘Lally’ Hicks (Jessica Williams), Bunty Broadacre (Victoria Yeates), Yusuf Kama (William Nadylam and the bakery man himself, Jacob Kowalski (Dan Fogler) who happens to still be madly in love with Queenie Goldstein (Alison Sudol) but she is working with Grindelwald.

First Grindelwald’s henchmen tried to kill the Chilean, a deer like creature of the forests which happens to be giving birth. Newt was there at the time but could not stop them from taking the youngster but little did everyone know at that time the mother had twins. Even though Grindelwald has the one he was not immediately aware that there were two. In a battle to capture the second creature that is able to pick the correct person to control the wizarding world there are massive wand fights, many twists and turns, truths revealed, lies created for power, all this that will take you on a mystical journey. In the end, hopefully electing the right person with the right motives to raise, teach and advance the good in wizards.

I absolutely loved this story which thankfully if you pay attention is easy to follow. Great direction that will leave you in ah of everything that is happening on the big screen in front of you. I did like the writing but there are a few side stories that did not need to be in the film but they certainly did not hurt the excitement of this journey in any way. The costumes, the photography, cinematography and the many different creatures in this film make this rendition a must see and enjoy. You’ll especially love the dungeon scene which will have you laughing a bit in the midst of danger. If you loved the other films and of course “Harry Potter” movies you will absolutely enjoy this adventure. All this with a great score and a particular song in the end credits called “Heaven” by Greg Porter that I loved.

Law is awesome in this role as he takes the reins to make a big wrong, a right. Mikkelsen looks like a bad guy and he plays it well controlling all his supporting bad guys that listen to his every command. Redmayne is amazing as always playing his slightly odd self to perfection. I like the brother in this story, Turner who is a great side arm for Redmayne’s character. Fogler is always a treat and not necessarily from his bakery, he brings a silly comedic element to the story. All others in the supporting roles and extras are right in place that make this a must-see film for young and old. As for the animals there are a few deaths but one in particular that is a bit gruesome and will not play well with very young children I believe.

More in this category: « Ambulance The Unbearable Weight of Massive Talent »
back to top

We have 361 guests and no members online