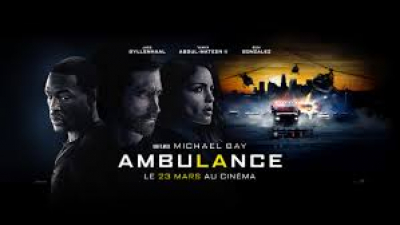 Like father like son! Danny Sharp (Jake Gyllenhaal) is a well-known bank robber and yes that profession does still exist. He has taken the reins from his father and is known to be just as ruthless and wanted by the FBI. He decides he needs some extra money right away so what else then to rob an LA bank. His plan was bullet proof and he even initiated his brother from another mother, Will Sharp (Yahya Abdul-Mateen II). A military veteran that is in hard times for insurance to protect his wife Amy (Moses Ingram) and their new baby boy. But with a twist of the arm and guarantee from his brother Danny, Will decides to join the team. Right then, right now and no waiting.

Once in the bank they never imagined a love sick cop for a bank teller would show up. Officer Zach because of his partner Officer Mark decided to head to the bank to ask the girl on a date. Bad timing for Officer Zach when a shoot out persists and officer Zach is taken hostage and eventually shot. So, when the ambulance shows up to help the fallen officer, Danny and Will hijack the ambulance with both Officer Zach in the back with EMT Cam Thompson (Eiza Gonzalez). So, the chase is on throughout all of Los Angeles, gun fights, helicopters, car crashes everywhere and a huge Mastiff owned by Captain Monroe (Garret Dillahunt) caught in the middle of it for a short time. Meanwhile in the back of the ambulance Officer Zach is dying and the only option to help him live is Cam, who is not a doctor, especially one that is moving at ninety miles an hour. The chase continues for quite some time maybe a bit too much time but Michael Bay keeps in interesting. Right up to the final scene when everything comes to an end. Some may not like the ending if it were real life but I kind of enjoyed it.

This is a typical Michael Bay film, lots of car crashes, shoot outs and explosions but also a lot of camera angles and jolts back and forth that make you feel like you’re part of the action. So much so that a few other film critics felt sick but I am the one with vertigo and I did well. The action in this story is off the chain and very well directed by Bay. I thought some of the writing was a bit off course for Gyllenhaal’s character but then again, he does play a raging lunatic. The photography is amazing along with the sound and score but it is the acting that plays first place. Gyllenhaal is obsessed, Abdul-Mateen II is pure genius and Gonzalez is superb with beauty and brawn. I liked that they wrote in a dog as well as a gay couple but they could have shaved a bit away from the time in the ambulance. I’m a fan of “Ghosts” on tv and one of the bad guys, Devan Chandler Long, in this film is the Viking ghost in the television show. I did not see the dog trainer in the backseat of the cop car with the dog but I heard others have so I guess out of all those chase scenes it took a dog to make the blooper moment. High action filled with some unpredictability makes this story definitely worth seeing on the big screen, vertigo aside!

More in this category: « Everything Everywhere All at Once Fantastic Beasts: The Secrets of Dumbledore »
back to top

We have 297 guests and no members online