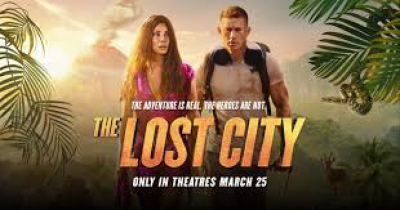 Loretta (Sandra Bullock) is a romance novelist and just so happens to be working on her latest story about a young beautiful woman, hoping to be rescued by Dash his name in the novels but his real name is Alan (Channing Tatum). Of course, the character Dash is handsome with long flowing blonde hair and a sculpted body from head to toe and except for the hair so is Alan. Loretta’s publicist, Beth Hatten (Da’Vine Joy Randolph) is continually taunting Loretta to finish the book so her and Alan can start their book tour. Loretta is a very well-known best-selling writer with her romance franchise but after losing her husband months earlier her train of thought and creativity has been scarred, understandably!

So, this is where the adventure begins, Loretta gets kidnapped by Abigail Fairfax (Daniel Radcliffe) and his henchmen. Why? Well not because she is famous but rather because Abigail, yes, a man, needs her to help him find and ancient treasure. Why her? Because her husband was working on the project when he died and Loretta is very capable to decipher some ancient language and help Abigail find the crown of fire, worth more money than ever imaginable. Loretta is kidnapped and now Alan minus the hair is out to help her. Why? Because he secretly loves her! He hires a tracker named Jack Trainer (Brad Pitt) to find her and once he does well the story takes a turn and Alan is on his own to save the fair lady that is dressed like a disco mirror ball in the middle of a jungle to fend on her own. A jungle, wild animals, criminals are on the hunt, as a writer and a stud both try to find a way out to safety yet in the end find each other’s true identities.

Personally, I liked the film but Philip my producer hated it. Was the direction a bit weak? Yes, but it was better than the writing. It resembles a classic “Romancing the Stone” but from a distance. The score was good, the photography was great and even Tatum’s naked butt, if it was his, looked lovely even with leeches all over it. Did you know leeches have 300 teeth! Well, they do and I never look forward to meeting one especially down under. Anyway. The film is fun and interesting and Bullock is brilliant as always but Tatum just doesn’t seem to be a good funny man. He wasn’t funny in “Dog” and not so funny here although he is good to look at which will entice the ladies and some men to see the film. I liked Hatten but if they stuck in a gay character, it may have been better but “Jungle Cruise” stole that idea, not that it would have mattered since this film stole many ideas from other films. I like Radcliffe but he too is not that funny and it’s difficult to watch Harry Potter as a criminal. Brad Pitt was spot on if only for a short period but even the extras and supporting characters seemed lost at times. I liked the film but I wouldn’t mark it high on your list unless you want to see Tatum’s stunt butt! Stay at the beginning of the credits because there is more to see. Animals were used in this film but in no way harmed by their actions.

More in this category: « The Batman Everything Everywhere All at Once »
back to top

We have 302 guests and no members online