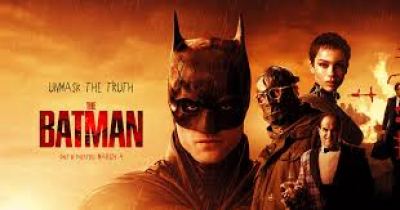 The Batman Review written by Philip Staub with 3.5 paws out of 4

The newest version of The Batman, written and directed by Matt Reeves and co-written with Peter Craig is a visually dark and intense psychological thriller featuring a Batman, played perfectly by Robert Pattinson. We learn that Bruce Wayne is only a couple of years into his new role and is still trying to figure out how he fits into the Gotham City crime fighting business.

The movie opens with the young Caped Crusader conflicted with the responsibility of saving a city from its own evil ways, the power he holds and fear that he instills in its residents, along with the pain and feelings of revenge he still processes due to the violent death of his parents. After saving an innocent subway rider from the torture of a “Joker” face painted gang, one of the gang members asks Batman “Who are you?” Batman replies “Vengeance”.

The Batman and Jim Gordon, played by Jeffrey Wright, team up to solve the gruesome clues left by The Riddler, played by Paul Dano. Riddler is a sadistic serial killer who seeks to reveal the corruption and injustice of Gotham’s politicians and police force including an attempt to link Thomas Wayne, Bruce’s father, to the corruption. Much of the corruption is linked to a club, the Iceburg Lounge, owned by Oswald Cobblepot aka Penguin played by Colin Farrell. Batman and Selina Kyle, Catwoman, played by Zoe Kravitz, team up when Selina’s girlfriend, who works with Selina at the club, goes missing. Kravitz portrays Catwoman as a fierce protector of her girlfriend with an affinity and compassion for Batman all while maintaining a dark edge.

In the end the mystery of Selina’s girlfriend is solved and the Riddler and his madness is revealed but not without a final attempt to destroy Gotham City and its citizens.

Matt Reeves’ Batman is new and fresh compared to the movies of the past. The movie was a perfect combination of thriller and action. There were no fancy gadgets or high-tech weapons like in previous films. Even the Batmobile was more of a muscle car then armored tank. My only complaint is that the movie was almost three hours long. There were parts where Batman and Jim Gordons scenes seemed more like they were Cagney and Lacy solving a crime and could’ve been shorter.

Robert Pattinson is easily one of the best to play Batman. He brought a human element to Batman and wasn’t over the top. Sorry Ben and George. Colin Farrell was unrecognizable as the Penguin and a scene stealer without enough screen time. I’m hoping there will be a sequel and Collin Farrell as the Penguin is the featured villain. Paul Dano as the Riddler was perfectly psychotic and all scenes involving Riddler kept you on the edge of your seat.

DC and Marvel Comics fans will enjoy this film and appreciate how different it is from the recent films from this genre.

More in this category: « Uncharted The Lost City »
back to top

We have 443 guests and no members online