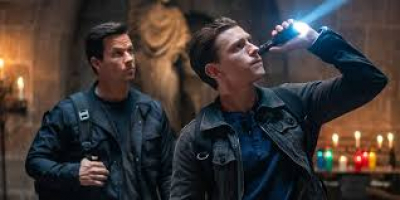 A young Nathan (Tiernan Jones) and his older brother Sam (Rudy Pankow) lost their parents at a young age and were being kept together in a boarding facility that is until Sam who would always get in trouble was eventually on the run from the law leaving Nathan behind because of his age. Sam promised though that in the years to come they would meet again and left him a favorite keepsake. An older Nathan Drake (Tom Holland) never gets to see his brother but holds on to all the post cards once sent to him from Sam.

Working as a bartender in New York City. Nathan one night has a very strange visitor, Victor ‘Sully’ Sullivan (Mark Wahlberg) who once worked with Sam on a quest to find a fortune that once belonged to Ferdinand Magellan, lost approximately 500 years ago and worth billions. Nathan is no amateur to working the streets and people but when asked to join Sully to find the gold, Nathan had second thoughts. What starts as a job to steal a golden key at a local auction ends up taking Nathan and Sully, now partners, on a journey to Spain and beyond. But their adventure is not without trouble for you see Santiago Moncada (Antonio Banderas) is in the search as well since he believes the gold and everything that comes with it belongs to his family as the rightful heirs.

Along their journey, Nathan and Sully end up meeting yet another partner, Chloe Frazer (Sophia Ali) who happens to hold a second key needed to unlock the mysteries of the treasure. Life is just not that easy for the guys since working with Santiago is Braddock (Tati Gabrielle) and her henchmen, one very aggressive and tough woman who Sully knows from his past when he worked with Sam, Nathan’s older brother. Their journey is long and filled with brutal fights, fire arms, lies and mistrust but albeit in the end if they don’t find the fortune at least they have each other along with Sully’s new friend, his cat.

Can Tom Holland carry a movie? Well, of course, everyone in the world knows Spiderman! But I must say in the beginning of this story with is a fast action nail biting moment you expect Holland to pull out his Spidey suit. Once you’re able to get past that moment you will begin to see him outside of his super-hero character. Grant it he is still pretty super in this film performing stunts at times beyond his Spiderman role. The direction is great and the writing superb since the main characters and the supporting roles are always involved in many dead ends and twists and turns around every corner. The special effects and the score are perfect and even though Holland is the main character his partner Wahlberg I felt was just a bit sleepy throughout the film. Not that his character was bad but Holland does a great job of showing us the next generation of action hero. I enjoyed the performance by Ali and Banderas as well but another kick-ass role was played by Gabrielle and she definitely brings her A game for sure. Don’t leave until the credits are over because I guarantee you’ll miss some important information which also involves, the cat.

More in this category: « Dog The Batman »
back to top

We have 286 guests and no members online