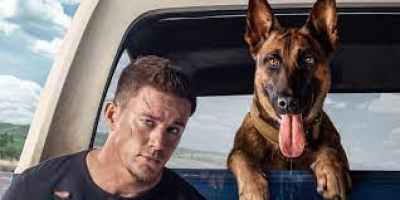 Army Ranger Briggs (Channing Tatum) is no longer serving in the military due to a traumatic brain injury but he is working at a sub shop in his local town. Not what you expect a war veteran to be doing serving irate customers that never have an inkling of what war means or for that matter PTSD which is part of what Briggs suffers from for the rest of his life. His military buddy Sergeant Riley Rodriguez (Eric Urbiztondo) had recently drove his vehicle into a tree which ended his life. Briggs has been wanting to get back in the work force he was trained to do but he needs a mental health recommendation from his former Captain.

Nothing in life comes easy and if it does there is usually some underlying reason for it. In this case the captain said he would approve Briggs mental health if he could run a service need. He was taking Lulu (a Belgian Malinois) known to be a killer on a trip along the West Coast to attend the funeral of his human military partner, Rodriguez. Briggs figures how difficult could this be? That is until he meets Lulu and from that moment on their road trip was more than an adventure it was more of an exorcism.

Lulu was a tough dog and for the most part only use to her partner, Rodriguez. So, in a series of moments in and out of Briggs 1984 Ford Bronco Lulu was showing who was boss and it wasn’t Briggs. With time, kindness, understanding and the rule of patience sometimes a beast can turn into a beauty. Along the journey they both encounter a strange back woods couple growing weed, a man thinking he is saving Lulu, two very odd women in Portland to nights in the rain and long walks along the highway, either way no matter what they had in front of them they learned to do it together on their way to the funeral. So, what happens to dogs in the military that turn out to be too aggressive to adopt out well you’ll find out at the end of “Dog”.

I thought like so many that this movie was going to be a comedy but it’s really more of a drama with a touch of levity from time to time. I think when you accept the fact that the story is more of a bonding relationship between man and dog you will see it for what it is, dramady. Tatum in his first directorial debut does a good job although I thought many of the scenes where a bit too choppy. You would not have known that Briggs had a daughter if not for the psychic and then in a scene with a unicorn you are left to assume why Briggs is not with his daughter. I think those moments could have definitely been played out more than a brief second. In filming the toughest actors to work with are children and animals but I must say this dog steals the show and rightfully so. I mean the movie is called “Dog”! It has a good score and some beautiful cinematography that will melt your heart but the main winner here is the true bonding between man and dog, hey your dog is not called man’s best friend for nothing. Ninety minutes is a perfect length for this story and even though in the end it pulls on your heart I felt the direction not the writing needed a bit more work. I think Lulu deserves an Oscar for her performance for sure.

More in this category: « Marry Me Uncharted »
back to top

We have 519 guests and no members online