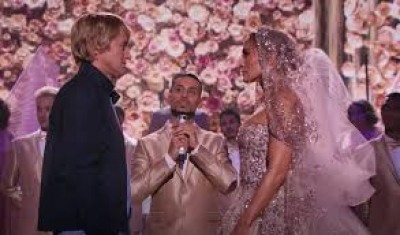 Kat Valdez (Jennifer Lopez) is a superstar with fans worldwide and her and her fiancé Bastian (Maluma) decided to sing her newest single “Marry Me” on stage in front of millions and actually get married. The bad news, Bastian cheated on Kat with one of her assistants and it broke news worldwide as Kat was ascending on stage in a wedding dress, gorgeous of course, to sing her song and be joined by Bastian. That never happened since Kat stopped singing and spoke to the audience about love which no longer involved Bastian, but rather, she looked out into the audience and picked a stranger, Charlie Gilbert (Owen Wilson), who was holding a sign “Marry Me” while attending the live concert with his daughter Lou (Chloe Coleman) and his guidance counselor friend from school Parker Debbs (Sarah Silverman). Charlie is a math teacher at his daughter’s school and works with Parker and other friend Jonathan Pitts (Stephen Wallem) who teaches music and the glee club.

So, Kat marries Charlie on stage in front of millions and decides along with her personal assistant (Michelle Buteau), not the slut but actually the faithful one and her manager Collin Calloway (John Bradley) to follow threw with the marriage so the world won’t think she’s insane. But hey how can you blame a girl who on stage in front of millions found out her fiancé is scum. But then again, marrying a stranger is a bit strange for her but maybe not Charlie. Heck I’d probably do the same thing! But throughout time Kat and Charlie began to explore each other’s worlds, her fame and music and his mediocre but stable life as a teacher and single dad with visitation rights to see his daughter outside of school. So, both begin to experience life in a world so unfamiliar to each other. Yet, in the end, both have got to make decisions on where their lives go whether together and make it work or separated and go back to the life they had before they first met not that long ago.

I actually loved this film. Yes, it is a chick flick and once again Lopez is the main attraction and, in this case, not far away from the real world in which she lives. Very good direction and a well written story help bring this predictable but lovable film to the big screen in the world of romantic films. They all have some similarities such as “Beauty and the Beast”, “Cinderella”, “Sleepless in Seattle” “When Harry Met Sally” and so many others. Although the story is somewhat predictable it still doesn’t take away from the fluttering feeling in my heart, one of love, wishes, hopes and dreams. Lopez is in her element as a singer who supplies a great soundtrack and Wilson which I thought would have been not a good partner turned out to be not bad as the wholesome working-class father and math teacher. Maluma I am not familiar with but he is very handsome with an impeccable voice. Silverman was fun in this film and is actually a very enjoyable actress outside of her strict and very loud comedy tours. Bradley and Buteau were superb supporting actors as was Coleman as Charlie’s daughter. Filled with music, dance, some downs but many ups, a few stolen moments from other films and a great old Bulldog this film is a true romantic comedy to be loved by all.

More in this category: « I Want You Back Dog »
back to top

We have 336 guests and no members online