I Want You Back Featured 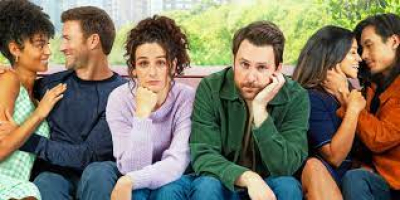 I Want You Back

Peter (Charlie Day) is in a six-year relationship with Anne (Gina Rodriguez) but they are discovering that their lives together have become, well, a bit flat with no spice or direction of growth. Most people I would think would like stability in a relationship but hey I’m only the reviewer. Anyway, in this day and age monogamy seems to be dead and as for me I’m a bit of a dinosaur, one old enough to believe in honesty, communication and truth but no wonder dinosaurs are extinct.

Anyway, Hunky Noah (Scott Eastwood) is dating Emma (Jenny Slate) and at their typical lunch date Noah decides to tell Emma that he’s found someone else. I think we’ve all experienced that scenario one or two or six times in our dating careers or maybe that’s just me! Anyway, Noah moves on to Ginny (Clark Backo) a woman who has her own pie company that happens to be right next to Noah’s gym. Working as a gym trainer and a woman who makes great pies what could be better. Meanwhile Emma moves on to a ‘woe is me’ behavior crying, non-functional and her two younger roommates are about at wits end with Emma but then again, they were tired of her even when Emma was still with Noah.

Back to Anne she left Charlie and moved on to Logan (Manny Jacinto) an odd in some ways but very chiseled new beau who is an arts instructor at Anne’s school where she teaches. I guess true love can be found anywhere and for some nowhere. I’m not mentioning any names! Anyway, Emma ends up meeting Charlie in the same building where they both work and rather than love at first sight they eventually decide to take on the revenge side of their old relationships. Rather than moving on they plot in a number of ways of breaking up both of the new couples. Albeit, in the long journey of sabotage there are many twists and turns and also for the ladies and some gentlemen a naked butt you will want to see.

There are some dramatic moments along with some levity especially thanks to Charlie Day but right when you start to laugh the scene switches to another lead who are not as funny. Ok the movie is a Rom-Com so of course there are serious romantic moments. The story would have received a higher ranking from me if at times the fun that lifted me up didn’t dropped me quickly like a bowling ball. So, the writing could have been a bit better but overall, the direction was good. Some nice scenery along with a great soundtrack helps but this film could have been a homerun if they left things alone keeping it romantic and a bit sillier along the way.

I loved Day he was funny right out of the gate. Eastwood does a nice job but that face and body seems to be made for more serious stories but thanks to the director for a full moon moment by Eastwood, apparently, he does workout. Jacinto is even more cut than Eastwood and I did actually like his character who is a bit air-headed on the outside but actually pretty smart on the inside. Slate is a delight who takes the story along with Day and runs with it showing she can cry then laugh all in one scene. Backo is more of a supporting character but serves her purpose well. As for Rodriguez, I am a fan but I thought she was a bit awkward and under-used in the story. In the end, it is a good girl’s night out film to see. None of the couples had pets, big mistake, huge! That pet could have added more likeability to the story.

More in this category: « Death on the Nile Marry Me »
back to top

We have 548 guests and no members online