Death on the Nile Featured 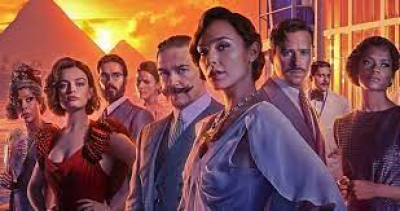 Death on the Nile

20th Century Studios, Kinberg Genre, Scott Free productions, TSG Entertainment. The Estate of Agatha Christie and The Mark Gordon Company presents a PG-13, 127-minute, Crime, Mystery, Drama, directed by Kenneth Branagh, screenplay by Michael Green and based upon the novel by Agatha Christie with a theater release of February 11, 2022.

In October of 1914 in Belgium, war has broken out and a young soldier helped save many members of his platoon by using the flight of birds and wind. In 1937, London that young soldier now older, Hercule Poirot (Kenneth Branagh) is watching a show, having a drink and eating desserts. Suddenly a woman walks into the room and it is as if everything stopped to look at this beautiful extremely wealthy woman, Linnet Ridgeway (Gal Gadot). She was there to visit her good friend Jacqueline de Bellefort (Emma Mackey) and to meet her finance Simon Doyle (Armie Hammer) and Hercule was there to witness the whole encounter as was Alessande Johar (Kemi Awoderu) and singer Elinor Glyn (Stacy Abalogun).

Six weeks later, Linnet and Simon are deeply in love and married and they and their friends and relatives are on the Nile River on a beautiful ship to celebrate the nuptials. Bouc (Tom Bateman) a friend of Hercules and son to Euphemia Bouc (Annette Bening) are on the ship as well as Louise Bourget (Rose Leslie) assistant to Linnet, Katchadourian (Ali Fazal) cousin to Linnet, Maria Van Schuyler (Jennifer Saunders) Godmother to Linnet and her assistant Bowers (Dawn French) along with Doctor Windlesham (Russell Brand) and a number of maids, cooks and other personnel. Oh yes and eventually the uninvited Jacqueline shows up full of hate for Linnet.

As time goes by Linnet is killed, her expensive necklace missing and the murderer is on the ship. But that’s not all there are other murders, twists and turns and secrets held by pretty much every member on the ship. Albeit in the end thanks to a very intelligent detective the mysteries on the Nile are brought to a very Shakespeare-like ending.

I enjoyed the writing but not as much the direction which at times seemed a bit too whimsical and misplaced. Grant it, it opened up the story for the who done it thrill. The cinematography was the best part of the film with some breath-taking Egyptian backdrops and a perfect score to take the audience on the journey. I just found the pace of the story slow and very predictable even though I never read a Christie book. A wonderful wardrobe was fitting to a star-studded cast. Branagh was superb is his role as were Gadot and Bellefort. Hammer to me was a bit off as the new husband but Brand was exceptional so much so that I never knew it was him, I believe the boy has become a man and a good looking one at that. The rest of the supporting cast were all fitting to this mystery thriller on the Nile River. There were a number of animals used in this film, birds, a snake, dog and a gator and all were treated within the element of their nature.

More in this category: « Jackass Forever I Want You Back »
back to top

We have 148 guests and no members online