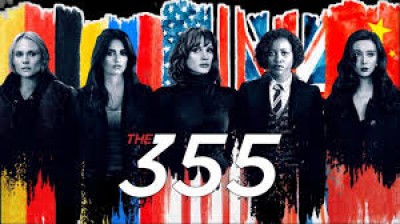 Mace Brown (Jessica Chastain) is a CIA agent sent to Paris to retrieve a top-secret weapon only one of its kind that could literally destroy all of mankind. After her partner is killed Mace not able to trust anyone decides to take matters into her own hands seeking the help of a fellow agent Khadijah Adiyeme (Lupita Nyong’o) a master mind in computers and tracking devices. Yet in the fight to accomplish her mission she is in the same battle with German agent Maria Schmidt (Diane Kruger) who is also working to capture this weapon from landing in the wrong hands.

Along the way all three women end of working together for the same cause while tagging along the journey with them is Columbian psychologist Graciela Rivera (Penelope Cruz) who found herself caught unexpectantly in the middle of saving the world as we know it. From France to Morocco to Shanghai the four women devise plans to get control of the device yet mostly coming up short with many bruises in hand-to-hand combat and shootouts along the way. Once in Shanghai they come face to face with yet another woman Lin Mi Sheng (Bingbing Fan) who ultimately has been keeping a watchful eye on the location of the device and the achievements of the women to capture it. In the end, men against women the ladies prove they can shoot, kick ass, murder, and outwit at the same level as the men if not better but overall, the question is if they are good enough to win in the final moments.

I ended up reviewing this film at home and even though I have a pretty large screen my momentum is sometimes shortened because its not the big screen in the theater. In the case of reviewing “The 355” that is not true. I absolutely loved this film which is directed and written brilliantly and not having a huge theater screen in front of me did not matter this plot kept my attention the entire time. Great photography, score, phenomenal action and thrills throughout the entire story while not knowing who to trust and who will win in the end. Some people may say, its like a version of “Charlie’s Angels” not even close this story was excellent and all the women as the men were on the top of their game.

I already love Chastain as an actress but in this film, she topped herself as a leading action actress. She really has the skills to play any role that is brought to her. Cruz played the naïve mother of two caught in the wrong place at the wrong time but she wears her shoes well playing both frightened and tough. Nyong’o is smart and captivating letting nothing get in her way and Kruger is right up with the others but I felt the weakest of the three but only in ranking since she can definitely play hard ball. As for Fan I enjoyed her small but important part to the plot and like all the others this woman you would not want to meet in a dark alley. These women are stripped from their glamour right down to blood and bones.  Action packed with a roller coaster journey that is sure to not disappoint if the male audience can support an all-women kick ass group of world savers. No animals come to mind in this film since none of the characters seemed like they would have time! I look forward to the sequel!

More in this category: « The Matrix: Resurrections Scream »
back to top

We have 463 guests and no members online