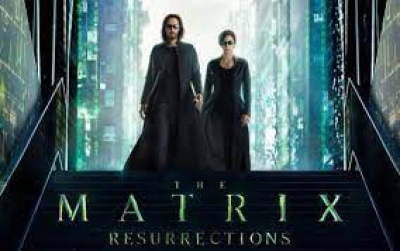 Movie Review written by Jon Patch with 1.5 out of 4 paws

Warner Bros. Pictures, Village Roadshow Pictures, NPV Entertainment and Silver Pictures present an R rated, 148-minute, Action, Sci-Fi with an under-tone of Romance, directed by Lana Wachowski, written by Wachowski and based on the characters created by David Mitchell and Aleksandar Hemon with a theater release of December 22, 2021.

The story takes us back into the franchise from 20 years ago dealing with two realities, the first is our normal life where Neo (Keanu Reeves) now lives secluded from his past and the world he once lived in behind human reality where he survived with Trinity (Carrie-Anne Moss). Currently in the norm Trinity has a husband and two young children. It’s not until Morpheus (Yahya Abdul-Mateen II) appears along with Bugs (Jessica Henwick) and her crew asking Neo to return to the life he once fought in with Trinity.

Choose your color, red or blue, secured in alien-like pods Neo is released and brought back into the world he avoided but he wanted to help Trinity leave a life not for her and with the approval of Niobe (Jada Pinkett Smith) fight for what matters, life behind ordinary people’s everyday life. Unaware that life is run by the Analyst (Neil Patrick Harris) and his familiar the black cat both Neo, Trinity, Bugs and her team are out to destroy the villains within the dark side of reality.

I’m not even sure why this film was made since it’s been so many years since the trilogy but maybe the die-hard fans will come out for it but overall, I’m not sure if it will do well at the box office. The direction was ok but at times jumped around so much it seemed not to make sense. Somewhat like the writing which was far and in between from making total sense. There is a lot of battle scenes which I’m getting tired of when multiple rounds are fired at each other and no one gets hit. I mean what are the chances of that happening, very slim I’d think even the hand-to-hand combat seemed meek to what you would see in a “John Wick” film. Some of the CGI and photography is pretty good but not so much so to warrant the lack of a yawn or two. So much of it seemed all over the place that I forget even now what the heck it was all about. It was a little like an hour too long of action with no meaning for it to play over an hour and a half let alone two and half hours.

Reeves does a good job here considering what he has to work with, even Moss who of course looks a bit older does a good acting job. Abdul-Mateen II was acting to hard to be like his predecessor but it did not work for him. Henwick is trying to keep the intensity in the film but with lack of interest in the so-called plot did not help her succeed. Pinkett Smith did well as a woman twice her age but it is Harris that steals his moment in the end. I’ve never really been a Matrix fan and I must say I still am not. Thankfully no one killed the black cat.

We have 163 guests and no members online