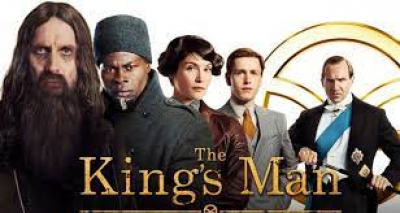 The year is 1902 in South Africa and the Duke of Oxford, Orlando Oxford (Ralph Fiennes), his wife Emily (Alexandra Maria Lara) along with their young son Conrad (Alexander Shaw) representing the Red Cross are visiting soldiers and prisoners at a guarded camp when a sniper takes fire. Twelve years later, Conrad (Harris Dickinson) has become a man at eighteen and has every intention to fight in war for his country. The Duke, his father raised Conrad alone and promised his wife that their son will never see battle. Conrad grew up learning to fight and hold his own under the watchful eye of Shola (Djimon Hounsou) who worked for the Duke along with Polly (Gemma Arterton).

It seems there is a war brewing and it involves Russia, Germany and England and the United States is staying out of it due to a hidden secret about the U.S. President Woodrow Wilson (Ian Kelly). So, the Duke along with help from others like Kitchener (Charles Dance) and his right-hand man Morton (Matthew Goode) their journey has begun to find out who exactly is stirring the pot for war between the three countries. In the meantime, the Duke and his associates are trying to take out the henchmen like Grigori Rasputin (Rhys Ifans) to be straight but he’s not, actually he has developed a liking for the Duke.

Meanwhile Conrad is at war and for the first time realized the lesson his father tried to teach him about combat and the battle over life and death. Throughout all this adventure in the end the Duke along with a few others have formed the elite special intelligence agency known at the King’s Man at a location where you can be a special agent and buy a tailored suit at the same time.

I absolutely loved this film and everything about it so much so that I could definitely watch it again. The direction was superb as is the writing and the expect the unexpected theory of the adventure is spot on. Great photography along with a phenomenal score and sound track this film has it all from the love of family, the hatred of war, a brilliant storyline along with some exciting special effects, war and fight scenes. The rigors of war with Conrad, the plane out of control with the Duke, the fight scenes with Shola and the marksmanship of Polly all add up to one of my favorite movies this year.

Fiennes is exceptional covering every emotional expression there is in life to cover. Arterton is so subtle but when it comes down to getting dirty serving tea is no longer a job requirement. I’m a fan of Hounsou and quite honestly, he does not disappoint. As for Dickinson the war scene will forever live in my memory. All of them and the supporting characters are perfect. As for any animals used in the story there are carrier pigeons and rats along with quite a number of mountain goats one in particular that does not have a friendly scene but there is one moment on a hill with the Duke and a goat that will have you laughing out loud.

More in this category: « West Side Story Spider-Man: No Way Home »
back to top

We have 135 guests and no members online