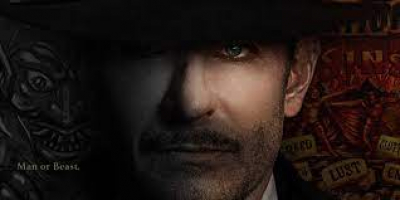 After leaving a burning house and busing it to a new town this wondering stranger, Stanton ‘Stan’ Carlisle (Bradley Cooper) follows a little man named Brofo (Linden Porco) into the world of carny. What Stan first stumbles into is an exhibit of a man/beast, asking the question is it a man or beast as it bites the head of a poor defenseless chicken. It doesn’t take long before Stan meets up with Clem Hoately (Willem Dafoe) that he is given a job, food, some money and a place to sleep. Actually, not far from the man/beast that sleeps in a cage nearby.

Once a member of the carny family Stan started to meet people, Molly (Rooney Mara) the electric woman, Zeena Krumbein (Toni Collette) the tarot card reader, Bruno (Ron Perlman) the strong man, Pete Krumbein (David Strathairn) the mind reader that works beside Zeena, Fee Fee the Bird girl (Dian Bachar), Snake Man (Troy James) among several other acts and members of the carny family. But Stan was not there to make friends but rather run away with Molly to start their own mind reading act around the country. Success came for the two of them with love as well but when Stan met Lilith Ritter (Cate Blanchett) a local psychologist the lives of Stan and Molly would be forever changed. With clients like Miss Harrington (Mary Steenburgen) and her esteemed husband, millionaire Ezra Grindle (Richard Jenkins) and others the floor act shortly changed to private sessions thanks to the certain help of a beautiful blonde. Yet greed for power and money with no care of mankind other than Stan’s self being leads the answer to the question of man or beast.

There are a number of things I liked about this film like the music, the wardrobes, the cinematography and verry much the acting. But the direction is a bit off which led the story, which is well-written, to suffer. The director has so many opportunities to use the carny world like a toy to a toddler but he decides to focus mainly on Cooper. Perlman along with Porco are somewhat pawns in the story as is the great Willem Dafoe who could have been so much more to the story line. Mara is great for the role as is the diabolical Blanchett but it is Cooper who is the main focus as the scammer that carries the Oscar nomination. He was spot on from start to finish leaving nothing short of a brilliant performance. I guess back in the 1940’s almost everyone smoked and drank and if they didn’t than cigarette companies must have been a major sponsor for this film. As for the animals in the film the chicken scene is pretty intense but there is a white rabbit that seems to survive the chaos.

More in this category: « House of Gucci Swan Song »
back to top

We have 474 guests and no members online