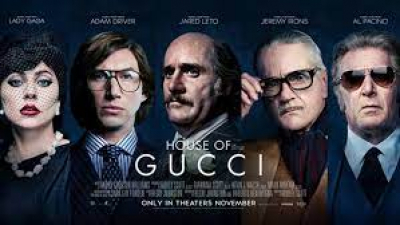 Patrizia Reggiani (Lady Gaga) was a woman that came from humble beginnings working for her father Fernando’s (Vincent Riotta) trucking business. When a good friend invites her to a swank 70’s costume party she meets Maurizio Gucci (Adam Driver). Of course, when she hears the last name Gucci, she felt her ticket to fame and glory was within arms reach and eventually it was when she married Maurizio against his father Rodolfo Gucci (Jeremy Irons) wishes. It seems Rodolfo was able to see right through Patrizia but still his son left the family business and married her.

It did not take long before Aldo Gucci (Al Pacino) got wind of the marriage and asked Maurizio to come back in the family business since Aldo’s son Paolo (Jared Leto) was basically an idiot and disgrace to the Gucci name. Well, it did not take long for Patrizia to take Aldo’s offer for her husband. She did not stop there Patrizia decided to take the bull by the horns and step by step tell Maurizio what to do and not to do until she, Maurizio and their daughter had fame and money.

Well, there’s nothing worse than a broken home and Patrizio had no problem creating it for the entire Gucci family. When Maurizio started to feel threatened by her taking power he decided to push back in a number of ways as the business Gucci started to fall apart. New investors, new ideas with the help of Tom Ford (Reeve Carney) and family matters in the past Maurizio thought he was on top of the world not knowing soon thereafter his world would come to an end and in fact so did Patrizia’s and that of her fortune teller, Pina (Salma Hayek)

I did love the story with a great job by Scott. Even the writing was well done but at times I really wanted to learn more details about the family’s beginnings including their financials both good and bad. There is a lot going on in this film and a number of different players but still if you blink your eyes for a second you should not lose your way of the plot. I did love the music throughout the film especially during the eighties which to this day is some of the best music ever. It’s a designer’s film so the wardrobes should have been superb and they were, highlighting the Gucci signature. The film doesn’t have a lot of peaks and valleys but seems to be straight in your face drama evolving around family, the Gucci business, downfalls and schemes.

The cast is superb with Lady Gaga leading the way. She does not miss a beat except for a few times her accent, which actually does sound a bit Russian, tends to go in and out. I can’t imagine though that Oscar season will not be throwing her name around. Driver also is superb throughout his transformations with his marriage, business and management. Nice to see Irons who played his part with fire as does Pacino while he goes from riches to rags. It is the transformation of Leto from a handsome leading man to a bald, over-weight cousin to Maurizio that takes the cake, although at times he seemed over-the-top but then again, he did play the part of a moron. Hayek and the rest of the supporting cast were all great and contributed to an entertaining, informative “House of Gucci”. I did notice that Leto when slapping his forehead with a newspaper slightly messed up his head piece but it was fixed swiftly. There are animals in the film mostly on the farm location and at one of their mansions with a Border Collie in the background but all seemed to be treated well. Overall this somewhat dramatic documentary type film should she a decent box office thanks to the draw of Lady Gaga.

More in this category: « Encanto Nightmare Alley »
back to top

We have 244 guests and no members online