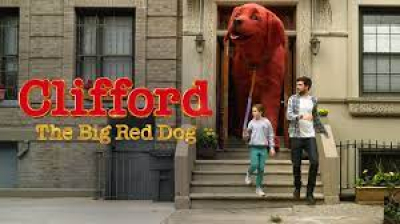 Emily (Darby Camp) is a middle school student in New York City living with her mother Maggie (Sienna Guillory). Maggie’s brother Casey (Jack Whitehall) is living out of a moving truck and pretty far down on his luck. When Maggie has to leave on business, she reluctantly has Casey watch Emily until her return. One afternoon while on a walk to school with Casey, Emily noticed an animal rescue tent set up by a mysterious man named Bridwell (John Cleese) which housed all types of animals from guinea pigs, rabbits, cats, a mini giraffe and lastly a small red puppy. Emily was told by her mother no pets especially since in their building run by Packard (David Alan Grier) no pets are allowed. So, after leaving the puppy behind and later returning home from school what she discovers in her back pack was a small red dog she named Clifford. Bridwell told her the pup would get as big as the love she showed Clifford but little did Emily know that would be ten feet high.

Casey had no idea the pup was even in the apartment but when he came face to face with a ten-foot red dog his shock was quite evident and his fear that Maggie would kill him was quite real. So, Emily was told she had to give it back to Bridwell but the big question how do you walk through New York with a ten-foot red dog. With the help of Emily’s friend Owen (Izaac Wang) he, Emily and Casey tried their best to conceal Clifford but when he made the local news matters got worse especially when Tieran (Tony Hale) and his crew from a local animal research firm decided to try and steal Clifford as their own success. You’ll understand why when you see the movie.

I reviewed this film at home in the comfort on my own sofa rather than on the big theater screen. I must say I still enjoyed it. The visuals are amazing along with the direction and writing but the one negative I have to say is the use of CGI at times. It would be interesting if Clifford really was a big red ten-foot dog but the film makers had to settle for CGI and puppets so every so often the CGI was a bit out of control when dealing with Clifford’s size. Also, when Emily is ridding Clifford through the city the visuals are a bit off as well. I must say as a family film that is awesome to take your kids to none of the technical errors and some bloopers will not matter since I doubt the youngsters will even notice. I also enjoyed the messages throughout the story, anti-bullying, pets and unconditional love and the joys of adopting a pet from a rescue. This is truly a great family film for everyone to see.

I had the pleasure of face to zoom face an interview with Camp and Whitehall and they were both just as nice as they were in the film. Both of the lead actors did a wonderful job working with the story as did the other supporting actors too. I really have no complaints or faults with the acting at all other than the fact I wish I was in the movie as well. All that aside from book to the big screen “Clifford the Big Red Dog” is a film to brighten your day and consider adopting a rescue pet as well but one that doesn’t grow ten feet tall from all the love you will share with each other.

More in this category: « Eternals Encanto »
back to top

We have 215 guests and no members online