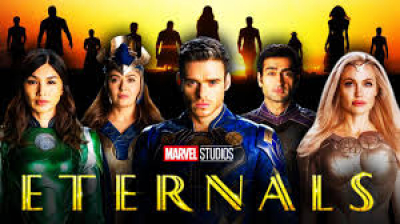 People always wonder if aliens live amongst us here on earth well according to this story, they do and for thousands of years shaping our planet into what it is today. To a degree that is because they were never supposed to interfere in the shaping of history like wars and other historical events. The Eternals were placed on earth to watch over humans but not let humans know who they are.

Ajak (Salma Hayek) living in South Dakota was the leader of the Eternals on earth. Sersi (Gemma Chan) who was once married to Ikaris (Richard Madden) is now in love with a human named Dane Whitman (Kit Harington) who like Sersi may have some hidden secrets of his own. Thena (Angelina Jolie) throughout time known as one of the strongest female warriors in the Universe was dealing with some memory issues causing a bit of a split personality. Her best friend and the one that watches over her Gilgamesh (Ma Dong-seok) is not only a good cook but a very strong man. Kingo (Kumail Nanjiani) is a Bollywood star having filmed multiple movies throughout the decades and never aging but he does have an explanation to his fan base. He travels with his film buddy Karun (Harish Patel) who films Kingo’s every move for a documentary and he obviously gets more than he bargained for in the process. Sprite (Lia McHugh) is the youngest of the bunch and like Pinocchio she just wants to become a real human. Phastos (Brian Tyree Henry) is the brains of the Eternals and very good at inventing things. He shares his life raising a young son, Jack (Esai Daniel Cross) with his husband Ben (Haaz Sleiman). Makkari (Lauren Ridloff) does not speak but she has the power of speed like no other. Then there is Druig (Barry Keoghan) who is a bit of a rebel and clashes with some of the other Eternals.

When all hell breaks loose and the Deviants, large destructive monster-like animals, attack earth the Eternals have no choice then to expose themselves to mankind as they use their powers to same humans, earth and kill the Deviants. Little do they know though that some of the closest allies are not being honest. Earth is running out of time and if the Eternals do not band together than the planet will be destroyed. Make sure you sit through the entire credits in order to find out what’s next, you’ll be glad you did.

Even though the film is over two and half hours it is well worth it. The direction and writing are exceptional but make sure you don’t leave to hit the bathroom because the way the story is pieced together you can easily get lost or miss a very important moment. The special effects, music, score, wardrobes and cinematography are all superb. Make sure you buy a large popcorn and a small drink, sit yourself down in a great spot in the IMAX theater and be prepared for an astounding journey. As for the acting I can not say anything bad or out of place since all the main actors were believable and phenomenal. Chan and Madden though were slightly more enthralling with Nanjiani right behind them in my opinion. There are animals in the film but none that were used out of context but hopefully that mutt in the beginning did not get eaten by the Deviant lurking in the water!

More in this category: « Antlers Clifford the Big Red Dog »
back to top

We have 301 guests and no members online