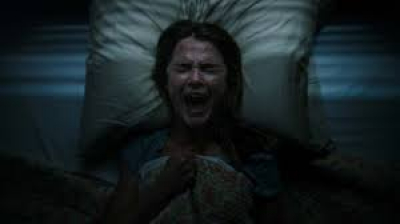 In a small country town in Oregon life seemed tranquil and normal well as normal as life can be way up in the woods. In an old abandoned mine Frank Weaver (Scott Haze) and his buddy are closing down their meth lab. One of Frank’s sons, Aiden (Sawyer Jones) is outside waiting in the truck for his father to return. When frank doesn’t come out and gun shots are fired Aiden decides to go look for his dad.

Later at home we discover that Frank and Aiden are locked up in the attic and Lucas (Jeremy T. Thomas) brings them food when its available. What we do learn at this time is that both of them are sick and Frank is becoming very violent. Back in school Julia Meadows (Keri Russell) who decided to move back home from California to live with her brother Sheriff Paul (Jesse Plemons) has some very bad memories of home but at the time she becomes more concerned with her student Jeremy who is acting very strange. As Julia starts to dig deeper into Jeremy’s life, she unravels that of a spiritual creature that has decided to terrorize anyone that crosses its path.

I actually loved this story which is well written and directed. It is refreshing as well to come across a creature that is extremely different than others used in horror films. The movie contains a number of moments that will have you jump from your seat as well as many gory scenes too. Some great cinematography and a perfect score make you enjoy the serene as well as frightening moments in the film. It really has a great balance of dialogue mixed with scary action scenes. It also follows so many other older horror films that have a strong woman lead even though she lives with many mental scars from her father. There are some moments that seem unreasonable or simple but hey this is a horror movie and, in my opinion, quite a good one at that.

Russell is great in this role standing up as a strong female hero. Plemons is the legal disbeliever that has trouble with old native folklore yet watching his love for his sister makes him even more likable. Haze does not have a big role but he does play it well. As for the brothers, Jones is part of the main plot but he does not have many lines but as for Thomas, he really draws you in to his role of a bullied, malnourished, abused and protective child. Of course, there are animals in the story, skunks, bears, birds and a few others but all become a feast for the beast.

More in this category: « Dune Eternals »
back to top

We have 285 guests and no members online