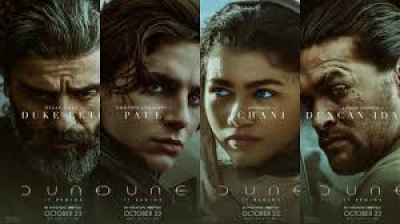 The story follows the journey of a young man, Paul Atreides (Timothee Chalamet), who is the only son of Duke Leto Atreides (Oscar Isaac) and Lady Jessica Atreides (Rebecca Ferguson) the leaders of their planet. There is not a day or night that goes by that Paul is not in one way or another tested or questioned by his associates Duncan Idaho (Jason Momoa) and Gurney Halleck (Josh Brolin) about his abilities to one day take over his father’s position. A position that the Reverend Mother Mohiam (Charlotte Rampling) questions by putting him to a special test, one that he nor passes or fails but leaves doubt in the minds of the people who know him well.

Paul has a tendency to get lost in his dreams, dreams that reflect the future. Yet when his father has agreed to go to the planet of dunes to help farm from the sand one of the most valuable items to all mankind, spice, does questions arise about his decision. Once on this planet of sand, high temperatures and little resources the question lies within the agreement, can Baron Vladimir Harkonnen (Stellan Skarsgard) and his nephew Beast Rabban Harkonnen (Dave Bautista) be trusted to keep their word. On this planet of sand overrun with giant sand worms and a vigilante group known as the Fremen headed by Chani (Zendaya) and Stilgar (Javier Bardem) agreements are broken, lives are lost and the future journey that awaits Paul and the use of his growing powers has just begun.

I have to say I absolutely enjoyed the film even though it runs two and half hours. There is always something going on to keep your attention with some flat lands throughout rather than peaks and valley’s but albeit it is sure to be enjoyed by all who see it especially those that are Star Wars or even Star Trek fans. The direction is brilliant as is the writing and the special effects of the space ships, fighters, planets, and space are all fascinating. Not to forget the score since it too is phenomenal perfectly fitting within all of its moments in the story. A great wardrobe and some breath-taking cinematography all help to makes this a great film.

As for the actors in the story, Chalamet who looks like a boy but acts like a man fits the role well. Both Ferguson and Isaac are superb as are Brolin, Momoa and Skarsgard and along with Bardem, Bautista and Zendaya hats off to a great casting. The film is filled with supporting characters and extras all of which compliment this somewhat too long but fantastical film. There are not too many animals used in this film other then giant worms and the cutest little sand rat both of which survive part one.

More in this category: « The French Dispatch Antlers »
back to top

We have 421 guests and no members online