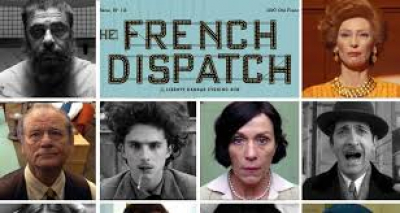 A number of journalists stories, working for an American newspaper in a make believe twentieth century French city tell their stories written for “The French Dispatch” magazine. Arthur Howitzer, Jr. (Bill Murray) is the editor of the newspaper whose job it is to critique his writers’ stories before they go to press.

We as the movie audience get to visually watch each one of the stories as written by the reporters at the Dispatch. Story one by the bicycle reporter Herbsaint Sazerac (Owen Wilson) takes us on an adventure of just how bizarre, cruel and dark people can be in public. Obviously, his writing is a bit too honest lacking the beauty of life according to Arthur the editor but Herbsaint has no intention of changing anything. Herbsaint’s story was the first story and somewhat interesting but a bit too short.

Story two as told by J.K.L. Berensen (Tilda Swinton) follows the life of Moses Rosenthaler (Benicio Del Toro) a criminal spending his time in an insane asylum for beheading two men. He spends his hours locked up yet being allowed to paint one of the guards named Simone (Lea Seydoux) fully undressed. It so happens that an art collector spending some time in jail, Julian Cadazio (Adrien Brody) has taken a liking to one of his paintings and wants to buy it and in doing so makes Moses famous but still in prison. Asking Moses to paint more art, Julian wants to have a showing at the prison inviting not only his Uncles Nick (Bob Balaban) and Joe (Henry Winkler) but other well know art lovers like Upshur ‘Maw’ Clampette (Lois Smith) as a way to propel Moses art work even more.

In story three, writer Lucinda Krementz (Frances McDormand) is out to follow the personal writings of a war protestor Zeffirelli (Timothee Chalamet). Lucinda gets a bit to close to the story and its creator but after a one on one with fellow protestor Juliette (Lyna Khoudri) Lucinda takes a back seat or does she!

In another story written by Roebuck Wright (Jeffrey Wright) we follow The Commissaire (Mathieu Amalric) and that of a kidnapped young boy that ends with a shootout and the eventual reunion of family. Even within the main story there are other sub-stories that come and go in a flash making this a film that if you want to understand better or see much of what you miss, you may have to see it again.

Each of these stories come to life on the big screen as directed by Anderson and if you are familiar with his work, you will appreciate the story or overall, it may not be your cup of tea. Other critics seem to like it more than I but then again, I am not a huge Anderson fan. His films are always a bit off the wall and sometimes uneasy to follow due to subtitles, so much going on at one time and just a lot of clutter that he is known for. I loved the backdrops and the movie within a play within a movie at times. A good score to compliment the stories that are mainly in black and white but again this film is a little too strange for me and the ending is being more than ironic.

It's a stellar cast with Murray and Wilson once again in his films followed by quite a number of cameos. My favorite of the stories is the second and I thought Benicio Del Toro was just awesome. There is some nudity by Chalamet and Seydoux along with some bad language but overall, all of the actors do a phenomenal job of bringing Anderson’s work to life and yet it won’t be a big office draw it seems that it will at least appease many of the critics come Oscar time. As for the animals in the film, rats, horses, dogs and many cats none were depicted in a terrible manner except for many a bird or two.

More in this category: « Halloween Kills Dune »
back to top

We have 481 guests and no members online