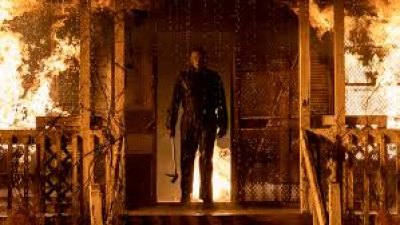 Just when you thought it was safe to go trick or treating, well I guess not! “Halloween Kills” picks up where the last saga left off with Michael burning in the basement of Laurie Strode’s (Jamie Lee Curtis) home. Grant it the story does a bit of a history lesson of the creation of this ravenous no sympathy for life Halloween killer. Yet when the fire trucks are headed to Laurie’s burning home, she screams from the back of a truck going in the opposite direction of the fire, “let it burn”. Of course, we all know Laurie lived in the last fight with her brother but this time she is being rushed to the hospital with her daughter Karen (Judy Greer) and her granddaughter Allyson (Andi Matichak) with possible fatal wounds.

Obviously, Michael escapes the fire and emerges upon a group of first responders trying to put the fire out. It is at this point that Michael begins his carnage letting no one get in his way. Definitely Michael is not taking names he is literally killing all people from his past and present and in a very gruesome way. This psycho demon from hell is stopping at nothing, gore, lots of blood and dismemberment everywhere. Yet unlike the other stories of Michael this time the entire town of Haddonfield are out to kill this crazy psycho once and for all. Officer Hawkins (Will Patton), Cameron Elam (Dylan Arnold), Lonnie Elam (Robert Longstreet), Tommy Doyle (Anthony Michael Hall), Marion the Nurse (Nancy Stephens) and Lindsey (Kyle Richards) are all back for a piece of Michael. Where does Michael always return to? Yes, his childhood home which this time is looking fabulous thanks to Big John (Scott MacArthur) and Little John (Michael McDonald) a middle-aged gay couple that have their moment with Michael as well.

Overall, I liked the film but I think the direction and writing could have been just a bit better. There are certain dialogues by some of the characters that I truly did not think were necessary other then to fill some of the audience in on what was going on relating to past films. Seriously who out there has never seen a Halloween film starring Jamie Lee Curtis? The opening set-up was ok but I really enjoyed the story when it picked up where it left off last time. The whole riot scene in the hospital in my opinion could have been left on the editing floor but I get it the writers were trying to make a modern-day statement about mankind. I missed some of the old school thrills instead of so much gore as well. Every time Michael was on screen with his charred mask, which I loved, the film just got more frightening. Overall though it is a great Halloween film to see for this time of year but when you return home make sure you lock your doors and bolt your windows for the last person you want visiting your home is a man known as Michael Myers and believe me he’s still out there.

I enjoyed the performances from Curtis even though she was not the main focus as much, Greer who kind of takes over in the fight and Matichak who seems to be the life line of the writing have more screen time than most. Richards and Stephens played their characters with belief but Hall was a bit over the top and Longstreet fell a bit flat. The extras and supporting cast help to keep the glue together of a serial killer on the lose but it is the character of Michael Myers that is the true star in this gore fest.

More in this category: « The Last Duel The French Dispatch »
back to top

We have 207 guests and no members online