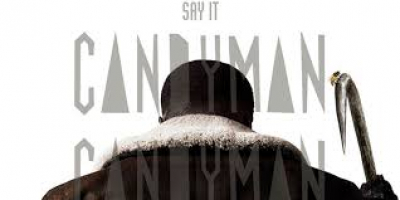 It’s been a decade since the Cabrini Towers has been torn down in order to make a new life for a new generation but when Anthony McCoy (Yahya Abdul-Mateen II) an up and coming artist and Brianna Cartwright (Teyonah Parris) move in together at the new Cabrini Towers in a wealthier atmosphere, the new does not necessarily forget the past. When William Burke (Colman Domingo) a friend of Anthony’s tells him the story of Candyman and the fact that he saw him as a young boy Anthony takes it home to Brianna jokingly saying his name five times in a window reflection, Candyman. This has brought the curse on to Anthony showing Candyman in any reflections or mirrors he comes upon.

Anthony has had issues in the art world always hearing that his art is stale and in the past but when he starts to consume the past with the present his art takes on a whole new meaning as he starts to use Candyman in his new art depictions but most art lovers don’t see it as Anthony does and he becomes even more consumed with the legend. As time continues friends in his surroundings start turning up dead even others unknown to Anthony but aware of the legend. In the end it is a fight for Brianna against Anthony or realistically a fight to the end with Candyman. Reinventing the new legend of this evil consumed by bees in his moments of death but why Anthony, truth be told you will find out in the closing moments of the story.

I am a big horror fan and I liked the original Candyman movies but this one just seemed mis-directed. I can’t say the writing was bad because it truly wasn’t but I did not like the direction of the characters. Actually, many of the actors seemed a bit amateurish like the young boy William Burke (Rodney L Jones III) he did not have a huge role but for the time he was on screen I did not believe him. It had it’s scare moments but they lacked a moment, not making me scared or jumpy at all. Maybe because I was a fan of the original Candyman that the current actor just seemed flat and once again not capable to carry the role of a killer. Even the gay couple who you thought may face peril Troy Cartwright (Nathan Stewart-Jarrett) brother of Brianna and his boyfriend Grady Greenberg (Kyle Kaminsky) were wasted as possible moments of additional fright. Overall, it’s an ok film but for a present-day remake of a great horror classic of years past this one choked on its candy. The only creature in this film is a bee and some ants but for one bee in particular its fate was not promising somewhat like this rendition. Sorry Jordan Peele you missed the mark on this one except for some of your racial innuendoes.

More in this category: « The Night House Shang-Chi and the Legend of the Ten Rings »
back to top

We have 359 guests and no members online