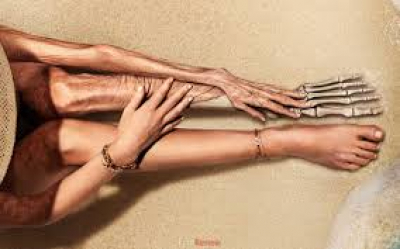 Movie Review written by Jon Patch with 2 out 4 paws

Universal Pictures and Blinding Edge Pictures present a PG-13, 108-minute, Drama, Mystery, Thriller, directed by M. Night Shyamalan, written by Shyamalan and based on the novel “Sandcastle” by Pierre-Oscar Levy and Frederick Peeters with a theater release of July 23, 2021.

Everyone likes to get away on vacation, a nice tropical resort location to swim, relax, and jet ski but for a vacationing family of four, father, Guy (Gael Garcia Bernal), his wife Prisca (Vicky Krieps) and their two young children, Trent age 6 (Nolan River) and Maddox age 11 (Alexa Swinton) life for them would soon fly by. While at the resort Trent became friends with a young boy, Idlib (Kailen Jude) of which they said they would remain friends for a life time and even though they live so far apart they developed a secret code as to communicate.

The resort Manager (Gustaf Hammarsten) approached the family with an ideal opportunity, a secluded beach away from the rest of the resort for a few hours. Why would anyone pass up such an opportunity so they decided to go and so did another family, Agnes (Kathleen Chalfant), her married son Charles (Rufus Sewell), his wife Chrystal (Abbey Lee) their daughter Kara age 11 (Mikaya Fisher) and their Yorkie. So off they go on an excursion with the hotel van driver (M. Night Shyamalan) to a beautiful beach surrounded by rocks and caverns. When they arrived a man, Mid-Sized Sedan (Aaron Pierre) sat off in the distance all alone not looking to be bothered. Soon another couple arrives, Patricia a psychologist (Nikki Amuka-Bird) and her husband a nurse, Jarin (Ken Leung) and thereafter nothing stays the same. People are aging at a rapid rate and because of the age of the children they show the changes quicker than the elders. Soon thereafter, one by one in different ways people start dying. You would think they could walk out from the beach but they cannot since every time they do, they blank out and end up back on the beach to live out their lives together completely in one day.

I can say once again Shyamalan directs a very bizarre film. I personally cannot say I like all is work but some I do but not so much this one. It was like he took a bag of marbles some with cracks and some without and shook them together and dumped them on a slanted table watching to see which ones fell off or stayed on longer, an analogy of course! I don’t want to give too much away but if you read the book, you know the insanity of the beach. I thought the story had potential but it was too long with pieces of the puzzle not really fitting their parts. I expected more intensity and scare factors but got a lesson in life and death. But in the end, you will understand the premise of this story one that is right up my topic on Talkin’ Pets and one that PETA may award it for. I’d like to get into the plot a bit more but it would ruin the surprise yet somewhat odd ending that the director is well known for.

I truly can’t say I loved the cast, Bernal and Krieps were captivating as were the different actors that played their children right up to adulthood except for Trent age 11 (Luca Faustino Rodriguez) he seemed a bit out of place and truly lost. I can’t say besides them that anyone in this film had an outstanding performance, maybe the Yorkie, but his life was quick, so much for dog years! I applaud the overall message in the film which I wish I could say what it is but it is something I will talk about and reference for some time on my show, Talkin’ Pets. Overall, the movie is average with some holes. Shyamalan tried to make it into a thriller but it had way too much filler that tends to grow old to quickly.

More in this category: « The Tomorrow War Jungle Cruise »
back to top

We have 326 guests and no members online