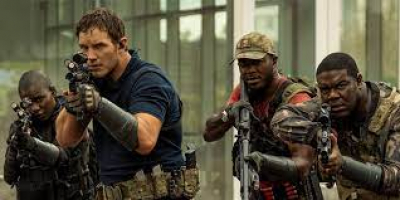 Dan Forester (Chris Pratt) is your typical suburban husband, married to Emmy (Betty Gilpin) with a young daughter, Muri (Ryan Kiera Armstrong). Dan is a science teacher at Woodrow Wilson that is until he is drafted to fight a war once again. This time it is in the year 2051, 30 years in the future, but he and many others won’t be fighting other humans but rather aliens. Aliens that are taking over the planet, killing all of mankind. Since most of the fighters from the future are dead the remaining crew traveled in time to recruit soldiers and civilians like Dan to jump to 2051 to help the fight.

In Dan’s jump he friends several people, Charlie (Sam Richardson), Dorian (Edwin Hodge), Cowan (Mike Mitchell) and Norah (Mary Lynn Rajskub) just to name a few but some survived the jump and some did not. Once in the future they are off on a mission to save several scientists that may have the one hope to save mankind but when Dan and his crew reach the building they are left with disappointment. While in the future Dan is under the command of lead scientist and a Colonel (Yvonne Strahovski) and in a fight to the finish their war it seems to have failed. But did it? Back in 2021 Dan joins forces with a few of his friends and long forgotten father James (J.K. Simmons) in one last journey in hopes of ending the beginning before it is too late.

Personally, I enjoyed this film. I thought the director did a wonderful job jumping from present time to future throughout the story. The writing was good but maybe could have been better in a few spots but for an alien film filled with a lot of action, fight scenes and special effects along with some pretty awesome aliens it kept my attention along with the fact it was right up my alley since I love films like this. I could see this becoming a sequel but they did not seem to end it that way but then again in movies like these the dead seem to rise over and over. Truthfully there is never a dull moment something is always going on.

Pratt does a great job as the somewhat quirky action hero and once again tackles the role here. Gilpin has a small role as does Armstrong but they project well especially Armstrong when dad gets recruited the expression on the daughter’s face is priceless. Strahovski plays the strong woman role as does Jasmine Mathews both proving they know how to kick alien ass. As for the other supports like Simmons, Hodge, Richardson and a few others they helped to keep the plot rolling in a thrilling direction. No animals were harmed in the film but many aliens were destroyed.

More in this category: « Black Widow Old »
back to top

We have 370 guests and no members online