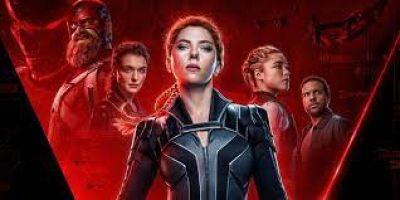 The story opens in a small quaint town in Ohio, year 1995, where a very normal family lives, mother Melina Vostokoff (Rachel Weisz), father Alexei Shostakov otherwise known as Red Guardian (David Harbour), daughters Natasha Romanoff (Ever Anderson) and little sister Yelena Belova (Violet McGraw) all living together like a normal family. Yet things don’t seem as they appear and if you notice their names are not the same it may be because they are not the normal family they appear to be. Taken from their home and so-called parents the young girls are trained in Cuba to grow up as Widows, trained armed forces able to take down an enemy opponent with skill and speed. As older women, many years later, Natasha Romanoff (Scarlett Johansson) otherwise known as Black Widow was able to break away from the grips of Dreykov (Ray Winstone) the mastermind behind the Widows but her sister Yelena (Florence Pugh) was still under his control.

We learn exactly how Natasha grew up to become the Black widow and as a rouge fighter out to take down Dreykov by finding his headquarters known as the Red Room, rescuing her sister and capturing the supply of Red Mist which when broken on to a Widow they are released from the powers of Dreykov and his control. On a dangerous quest from Morocco to Norway to Budapest Natasha is out to find her parents and with their help find Yelena and as a family destroy the Red Room and rescue the other widows who only know how to be trained killers. For Black Widow, pain only makes her stronger as she and the family fight to the end. But in the end, it is Yelena that ends up in a cemetery alone, well almost alone until a certain visitor shows up. Wait until the credits end if you want to see where the next chapter takes the family.

I thought this film flowed extremely well with the right amount of dialogue, action and a bit of levity but the only spot where I started to lose interest was right before Lexi the pig showed up. The slow period for me does not last long but then like a bolt of lightning the action picks right back up. So, the more I think of what I saw the more I really liked it. My friend Philip who was with me said he wished they showed a bit more of the children being trained before they turn into fierce fighters and I tend to agree. What would another ten minutes do to the length of an otherwise fast moving well directed and written story about the “Black Widow”. The wardrobes were great, the score brilliant, the special effects off the wall and the cinematography superb. It is truly a well-produced film that does lay heavy on the meaning of family.

Johansson has no problem carrying this film especially with Pugh by her side. The two of them alone or together are really able to kick some serious butt. Weisz is great as the so-called mom as she works well as a support to the daughters and as for Harbour, he was an acquired taste for me at film but in time he grew on me bringing some levity to his character as a Russian Captain America or should I say an out of shape Red Guardian. Winstone who plays the bad guy was sufficient as the villain but he did not absolutely wow me as this character. As for Lexi the pig, thankfully she was not harmed in the making of this film. Overall, go see this Marvel movie you won’t regret it.

More in this category: « F9: The Fast Saga The Tomorrow War »
back to top

We have 142 guests and no members online