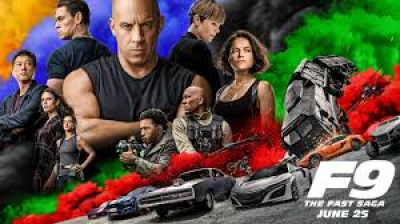 Dominic Toretto (Vin Diesel) has checked out of working in the fast lane, now he lives on a farm up in the hills with Letty (Michelle Rodriguez) and his son. That is until the boys show up telling Dom that Mr. Nobody (Kurt Russell) needs his help to try and save the world. At first the answer was no but after Letty was in so was Dom so he and the team, Roman (Tyrese Gibson), Tej (Ludacris), Ramsey (Nathalie Emmanuel) and eventually Mia (Jordana Brewster) set out to find one half of the Aries in the jungles of Monte Quinto. The Aries is a powerful globe that when both halves are reunited it can change the world as we know it. Little did everyone know that Jakob (John Cena) Dom’s little brother was the mastermind with Otto (Thue Ersted Rasmussen) and a boxed Cipher (Charlize Theron) who are out to retrieve both halves of Aries and control the world.

We find out through flashbacks just why Dom and his little brother Jakob never got along after their father died in a race car accident. But sometimes the truth behind the lies do come to surface making more sense than the actual lie. The job for all the players involved took them to the Caspian Sea, Tokyo where they meet up with the undead Han (Sung Kang) and his so-called little sister Elle (Anna Sawai) who happen to be in the right place at the right time for Letty and Mia. Continuing on to London and Edinburgh and eventually Tibilisi, the capital of Georgia the team has gone through a treacherous journey along with explosions, an enormous amount of smashed cars, hand to hand combat and enough guns to supply a small country and let’s not forget the trip to outer space. Yes, I said outer space! Overall, the battle is all worth it in the end for so many reasons.

Well, I liked the film and most of the direction but the written story was so off the wall. The crash scenes are awesome actually worth seeing the film, the gun moments are a bit unbelievable, how a machine gun can fire at someone from feet away and not hit them but yes this is a movie pure entertainment. I just think if they made the story line a bit more believable then I could not condemn that portion of the film. Great cinematography and special effects will keep your interest throughout thankfully because the story line is way too off the top. Plus, I struggled with the young brother’s height differences, in present time they were the same height just a bit odd that the younger brother Jakob (Finn Cole) was so much shorter than the young Dom (Vinnie Bennett) and at times I felt like they dubbed in Diesel’s voice when young Dom spoke. All that aside the action will blow you away.

I can’t say much bad remarks for the acting in this latest version of the franchise since they all did great with what they had to work with, Diesel and Cena great rivalry, Rodriguez is superb at kicking butt, Gibson and Ludacris bring the humor with Ludacris the much better of the two and Brewster and Sawai along with Kang bringing up the rear in the battle of all battles. Rasmussen is sufficient but as for Theron her talents were truly wasted in this role. There are a number of cameos along with a great supporting cast making the actors in the film saviors to this rendition. I don’t believe any animals were used in this story and as for the space journey what the heck were they thinking. PS remember to stay during the credits there is more to learn when someone shows up, small but packing a powerful punch.

More in this category: « Hitman's Wife's Bodyguard Black Widow »
back to top

We have 370 guests and no members online