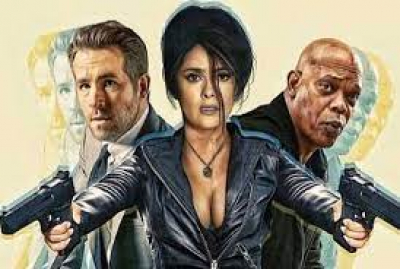 Movie Review Written by Jon Patch with 2.5 out 4 paws

Michael Bryce (Ryan Reynolds) has been seeing a therapist since his last debacle as a bodyguard which led to him losing his license and the client. Yet when his therapist tells him he is cured of his nightmares and to give up weapons and go on a vacation in Capri, Italy, what turns out to be a relaxing journey turns into a gangster shootout with Sonia Kincaid (Salma Hayek) who happens to need his help to rescue her husband Darius (Samuel L. Jackson). This rescue leads the threesome smack down in the middle of an Interpol investigation to help save Italy from complete destruction from the evil hands belonging to Aristotle Papadopoulos (Antonio Banderas).

So, Sonia wants to become a mother but for some reason is not getting pregnant by Darius. Michael wanting desperately to get his bodyguard license back in need of help reaches out to his father (Morgan Freeman), once a top bodyguard himself. In the end of car chases, shoot outs, explosions, fist fights and life changing events, Michael, Sonia and Darius throughout the start to the finish have saved each other’s lives in more ways than one.

I enjoyed the film but not quite as much as I did the first one. It seemed the direction was a bit everywhere as was the writing never making me enjoy the dialogue or plot for that matter. The cinematography is gorgeous and the score and music in tune to what is happening on the big screen. It felt forced and if not for the action scenes and the crimes involved, I would not have liked it as much as I expected too because the comedy seemed to take a back seat for the most part. Yes, I know it’s a movie and pure entertainment I get it but when someone shoots an enormous number of bullets at you and you don’t even get winged then someone needs to get back to the shooting range.

I am a big fan of all the main characters especially Ryan Reynolds which of course he does well dying several times in this story. He has a way of mixing comedy well with drama but it seemed slightly off the road here. Hayek was funny but could have been hysterical if I was able to understand her a little better. Jackson knows how to keep your attention and does so in this film like his others and Freeman although a small role is perfection. Banderas might consider keeping his hairdo as in the film it suited him well at his age and the role he plays as the bad guy. Overall an entertaining film that will keep you interested but I just don’t think it will blow you away.

More in this category: « In the Heights F9: The Fast Saga »
back to top

We have 91 guests and no members online