The Conjuring: The Devil Made Me Do It Featured 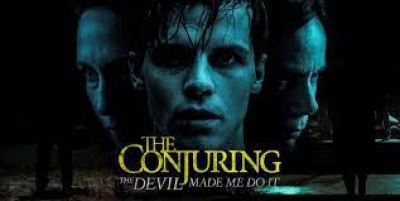 The Conjuring: The Devil Made Me Do It

Based on a true story, Ed (Patrick Wilson) and Lorraine Warren (Vera Farmiga) are performing an exorcism of a young boy, David Glatzel (Julian Hilliard). Present at the family home, Debbie Glatzel (Sarah Catherine Hook), her boyfriend Arne Cheyenne Johnson (Ruairi O’Connor) and Drew (Shannon Kook) who was helping the Warren’s along with a local priest. Things did not happen quite as they hoped when all hell literally breaks through and the demon leaves the body of David and enters into Arne upon his request.

Life seemed to go back to normal until the killing of Bruno (Ronnie Gene Blevins) who loved music and helped the Glatzel’s at their dog boarding kennel. Stabbed 22 times like that of a young girl found in the woods the Warren’s knew that the demon was not gone but what they discover that the demon (Eugenie Bondurant) is part of a curse that is out to destroy anyone that gets in its way of taking souls and it includes both Ed and Lorraine. With Lorraine’s power to see the past and Ed’s power to stop a demon with prayer the Warren’s are on a deadly journey to stop a curse and free a young man in jail for the killing of a friend. This case in court was the first trial to rule demonic possession as the reason for murder.

I thought Chaves does a nice job directing the story, I found that the intrigue and suspense is there but the element of surprise not so much for me. Like so many others the dark corner or the creepy music is the set-up for something that is about to jump out at the viewers. I like old school scare like that of “A Quiet Place Part II” out in theaters now. This film is an ideal addition to the franchise but I only wish the scare set-ups were not so telling. The writers are brilliant in making the story interesting by keeping the thrill going throughout the entire film while the characters search for the location of the curse. The clues will keep you guessing from start to finish of who might be the demon that planted a curse on the Glatzel household. Some great props, costumes to reflect the year 1981 and some scary moments throughout the entire story will keep your interest for sure. If you’re a big jumper of scary moments like my friend April who went with me expect to jump about every 15 minutes at least.

Once again, a superb acting job by both Wilson and Farmiga, he with his cane and heart medication made me feel like I was part of the movie personally as I walked with a cane and took my heart medications as well. The supporting characters were all great with hats off to O’Connor and Hilliard who give my dear friend Linda Blair a run for her money. Overall, for a good scare especially since it’s true this could be the film for you but it is recommended to wear a cross and bring holy water. Thankfully no dogs were murdered in this film!

More in this category: « A Quiet Place Part II In the Heights »
back to top

We have 1201 guests and no members online