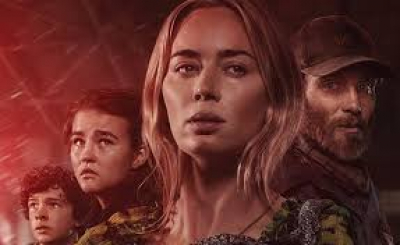 The film starts off on Day 1 in a normally quiet small town. Lee Abbott (John Krasinski) is running into town to pick up some quick snacks to watch his son Marcus (Noah Jupe) play baseball. He meets up with his wife Evelyn (Emily Blunt), daughter Regan (Millicent Simmonds) and youngest son Beau (Dean Woodward) to enjoy the day with friends and family at the park. What is expected to be a day of laughter and fun turns out to be a nightmare when they all witness an unknown object falling from the sky. Soon thereafter carnage has not only hit the major cities in the country but their small quaint town as well. Make a sound you die!

Cut to Day 474 the story picks up where part 1 left off. Knowing that they can not stay in the house the remaining family members decide to venture off into the woods in search of others. It is this journey that they not only meet up with an old friend Emmett (Cillian Murphy) but also the challenges to stay healthy and alive along with outsiders that have other motives outside of staying alive. It is when Regan realizes that a song on the only radio channel is continually play “Beyond the Sea” that embedded in this song is an answer to most of their problems, so they think. Finding the signal and a way to getting to it has taken on a whole new fight and hopefully answers to so many questions and possibilities.

I absolutely loved this film. Being a horror, thriller fan this movie for me was perfection. Krasinski not only was a superb director but also writer as well. I have not jumped out of my seat in many years and this film made be airborne at least half a dozen times. You have to expect the unexpected since Krasinski is so smart on placing sudden scares throughout the entire movie without warning of music or set-ups. I especially loved the multiple scenes involving the family members as the mother deals with one issue her son with another and Emmett and Regan with yet their own dilemma’s. I personally have nothing bad to say about this story more so I think it was better than the first and I thought the first was innovative, original and a home run but this to me is a grand slam. There is never a dull moment in this story at all so look forward to a part 3 and hopefully Krasinski is able to get it out as soon as possible because I cannot wait as long as I did for this one.

Krasinski even though is role is short lived he obviously was great. Blunt pure perfection as is Simmonds who pretty much takes the lead in this sequel. Jupe adds tension as does the scenes with the baby but it is Murphy that really adds a great one two punch to the story as a man in mourning out to survive not only for himself but the Abbott family and others. A few dogs in the film but no violent acts to mention involving them. Watch for a cameo role by Djimon Hounsou along with some great work by the extras in the story. It was great to watch this film with very little gore but more suspense and unexpected thrills. Hold on to your popcorn people since this film is sure to make you jump. I loved the first one but this one even more especially in Dolby sound. Thank goodness for radio!

More in this category: « Spiral The Conjuring: The Devil Made Me Do It »
back to top

We have 478 guests and no members online