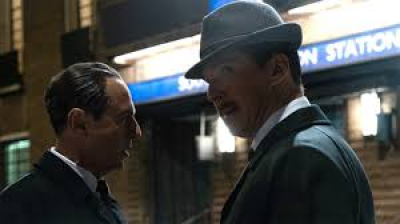 Movie Review Written by Jon Patch with 3.5 out of 4 Paws

Lionsgate, 42, FilmNation Entertainment and SunnyMarch present a PG-13, 111-minute, Thriller based on a true story, directed by Dominic Cooke and written by Tom O’Connor with a theater release date of March 19, 2021

If you haven’t known about the possible nuclear attack on the United States by Russia during the JFK Presidency in the 1960’s and the Cuban involvement then you will after watching this excellent film. During the times of the cold war Greville Wynne (Benedict Cumberbatch) was a normal salesman with a wife and young boy. But his normal life is thrown into a whirlwind when two American CIA agents Emily Donovan (Rachel Brosnahan) and Dickie Franks (Angus Wright) convince Wynne to serve his country by conducting new business in Russia.

At first shocked but later honored Wynne leaves his family behind telling them nothing of his true work as an agent for the United States. Working with Oleg Penkovsky (Merab Ninidze) who is also a businessman in Russia Wynne is smuggling information about Russia’s plan to bomb America. These two men for the most part were the two people that helped to stop a nuclear war between two super-powers.

I absolutely loved this movie learning about just how close we were in the 1960’s to the end of the world as we know it. The intrigue and the thrill of this story is never boring and contains some real footage from JFK’s presidency. I guess the average person never truly has any idea what is going on behind closed doors in any country. I loved the direction and writing with this informative and nail-biting story. Obviously, the war was stopped but what happens to these men in the film is heartbreaking while at the same time honoring of their acts to make a difference for all citizens of the world.

With more dialogue than action, Brosnahan and Wright bring intrigue and suspense to the story but it is Cumberbatch and Ninidze are the actors that truly own this story and rightfully so should be honored in the world of film actors for their roles. Everything from the supporting actors to the cinematography to costumes and back-drops in this film are superb. I thought there was one or two scenes that the actors held back but overall this story is a must see for all.

More in this category: « Wonder Woman 1984 Those Who Wish Me Dead »
back to top

We have 237 guests and no members online