News of the World Featured 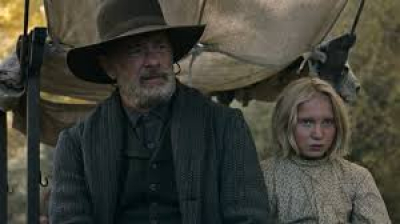 Some years after the Civil War ended Captain Jefferson Kyle Kidd (Tom Hanks) set out on an adventure to travel from town to town as a non-fiction storyteller of the current news. Articles range from national to international, serious to humorous, each time he speaks with hopes of tips Captain has a way of holding his audience at bay. While traveling alone to his next read on the plains of Texas he comes across a man hanging from a tree and not too far off in the brush a young girl hiding from danger. Captain later comes to find out her name is Johanna (Helena Zengel) even though she speaks little to no English.

Taken by the Kiowa tribe at an early age when her parents and sibling were killed Johanna grew up speaking Indian. Yet when Captain is left with no choice but to help take her to relatives’ miles away, they develop a relationship almost like that of a father and daughter. Of course, along their journey the road is paved with trials and tribulations but it is not Captain alone that helps to find survival but that of the young girl as well. At the end of their journey when the girl is left unhappy with her true Aunt and Uncle it is the experiences that both Captain and Johanna lived together that makes their bond so tight and ever-lasting.

I really enjoyed this story from start to finish. The director keeps the audience intrigued from set to set and it is the writers that put words to the main characters brilliant expressions. Some wonderful cinematography and many supporting actors to bring, fear, danger, laughter and smiles to the storyline this film is a level ride with a few peaks and valleys that help to keep this journey engaging for the viewers. Hanks has already proven he can carry a film on his own and once again he does it here but to add to his brilliance Zengel the young actress along for the journey does not speak much but she surely makes up for it with her acting skills. I’d totally recommend this journey that may be a slow ride but one filled with many adventures to keep you intrigued from start to finish.

More in this category: « Greenland The Croods: A New Age »
back to top

We have 1152 guests and no members online