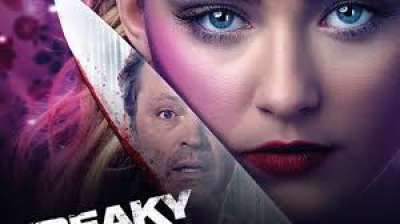 Movie review written by Jon Patch with 3.5 paws out of 4

When a madman known as ‘The Butcher’ (Vince Vaughn) decides to go on a murder spree killing high school students he comes upon one in particular, Millie (Kathryn Newton) who happens to change bodies due to a mystical knife in which he tried to kill her with. One big deal for Millie who is now in a serial killer’s body is that if she does not stab him back before midnight of the thirteenth day of the month she will remain in his body and he in hers who will continue his killing spree throughout the town.

But thanks to two friends, Nyla (Celeste O’Connor) and openly gay Josh Detmer (Misha Osherovich) Millie stands a chance of reversing the curse. That is if she is not caught or killed by the law, one of which happens to be her sister Char (Dana Drori).

Filled with some twists and turns, blood and gore, hysteria and levity this film really has something for everyone. Resemblances to movies like Friday the 13th, Scream and Halloween to name just three Landon does a great job keeping the film campy, funny and scary with enough going on to keep your attention from start to finish. Even the writing that at times seems outrageous and far-fetched still fits in perfectly with the whole idea of the storyline. This is truly a film for my library since I know I can definitely watch it more than once.

Vaughn really makes a great serial killer, as well as a pretty good school girl with a boy on man kissing moment to top it off, assuming he’s eighteen that is! Between Vaughn and Newton their characters are busy causing carnage throughout the story and Newton has no problem keeping up with Vaughn. Both O’Connor and Osherovich are great side-kicks and bring on some witty yet intriguing moments to the film. A job well done by casting the actors all made this film worth seeing since they all played their roles perfectly. Honestly this film could have made it as a straight-out horror film as well if they wanted to but the laced in comedy did not hurt it at all.

More in this category: « The Last Vermeer All My Life »
back to top

We have 814 guests and no members online