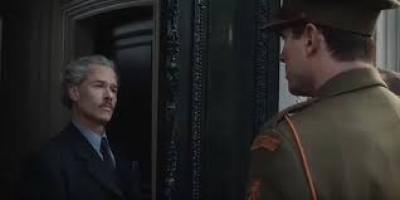 Imperative Entertainment, NL Film and TriStar Pictures present an R rated, 117 minute, Drama, directed by Dan Friedkin, written by Jonathan Lopez and based on the book “The Man Who Made Vermeers”, with a theater release date of November 20, 2020.

Shortly after the end of WWII, Captain Joseph Piller (Claes Bang), a Dutch Jew along with his assistant Minna Holmberg (Vicky Krieps) and with the aid of Esper Dekker (Roland Moller) have all set out to find the whereabouts of artist Han Van Meegeren (Guy Pearce). Han you see during the war was selling expensive art painted by a Vermeer from the 1600’s to the Nazi’s. The value of these paintings especially one in particular is priceless.

Captain Pillar was not the only person looking for Han but several others as well so it was a fight to see who can find him first and bring him to justice. A justice that when found guilty will sentence him to death. Yet during his trial the tables get turned as Captain Piller and his associates are out to prove him innocent of the crime he is suspect of committing and with a canvas, the stroke of a brush and eventually a little acid Piller may just have a case to save Han from prison and eventually death.

I thoroughly enjoyed the true story as written by Lopez for the screen and directed quite brilliantly by Friedkin. The cat and mouse and struggle for proof and possible innocence keeps the audience guessing of what might happen next that is if you don’t already know your history on this case. The scenic views are crisp and appealing along with the sets and uniforms created for the cast. The film has a few dry moments but thanks mainly to Pearce and his great acting skills the story once again becomes frivolous and gay.

Pearce is truly the light to this film with his look and wit that draws you in to know more about his character and what he actually is or is not guilty of doing. Bang is a bit of your strait-laced man of authority with a side-kick played by Moller that brings balance of levity at times to the story. The two of them reminded me slightly of Abbott and Costello or Dean and Lewis at times. Krieps adds a bit of a side story to the plot as does a few other supporting members of the cast. So, if you are a history buff looking for a good drama and a bit of intrigue then this film may be the two hours on the big screen you are looking to enjoy.

More in this category: « Borat Subsequent MovieFilm Freaky »
back to top

We have 134 guests and no members online