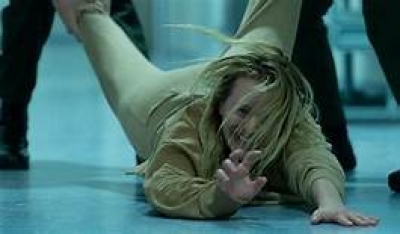 When a young woman, Cecilia Kass (Elisabeth Moss), decides to plan an escape from her controlling, rich and super-smart boyfriend, Adrean Griffin (Oliver Jackson-Cohen) with some help from her sister Emily (Harriet Dyer) she hides out with a friend, James (Aldis Hodge) and his daughter Sydney (Storm Reid) at their home. Afraid to step outside she lived in fear until Emily shows up with a message that Adrean has committed suicide. Soon thereafter Cecilia gets a letter from an attorney, Tom Griffin (Michael Dorman) brother of Adrean requesting Cecilia’s presence for a reading of Adrean’s will, at which Cecilia is left millions.

Have you ever had that feeling like you’re not alone in the room? Well for Cecilia at first she thought it was paranoia but when circumstances became even worse and she ran to Emily, James and Sydney for help everyone assumed she was losing her mind. It’s difficult when you know you are speaking the truth but others without evidence never believe you, it’s like being in a manipulative relationship and that person is making you look like the crazy one. So Cecilia begins to take matters in her own hands but when someone is murdered Cecilia ends up in the psych ward at a local hospital. Yet her occurrences do not even stop there but instead become more intense and even more dangerous to her, others and the ones she loves. With several surprises around every corner Cecilia will not stop until she receives the honest answer to her question.

I love this film and hats off to Whannell, for a job well done, from the direction to the writing, which is filled with a number of twists and turns throughout this intense story. The first half of the story plays to a mystery but when the second half begins as a thriller the pit in my stomach never once went away since I never knew what to expect next. Ironically Zeus (Dog) is one character that tends to proceed with caution when needed. This is old school horror which will leave you on the edge of your seat wondering what comes next and from where. A beautiful home location on the water, a great intense score, seeing it in Dolby sound all lead up to a great two hours on the big screen.

Moss is perfection from start to stop making crazy look a step away for anyone. Jackson- Cohen is not in the film much since you hardly ever see him but both he and Dorman compliment themselves in the end. Dyer is a good support as is Reid but ladies wait until you get an eyeful of Hodge, not only is he extremely attractive but he knows how to act as well. The leads to the supporting characters including the dog all make this low budget film a true hit that is sure to make millions on the big screen and beyond.

More in this category: « The Call of the Wild The Way Back »
back to top

We have 109 guests and no members online