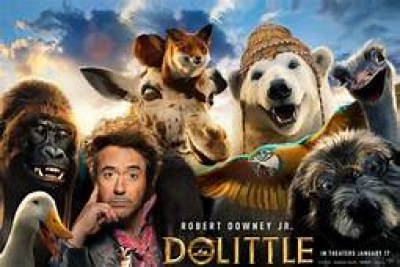 Dr. John Dolittle (Robert Downey Jr.) has always had a certain way with animals actually he could talk to them and yes he would hear them talk back. A matter of fact when Queen Victoria (Jessie Buckley) discovered his talent she helped him set up an animal sanctuary for all the animals who need him. But Queen Victoria has taken ill and according to her doctor Dr. Blair Mudfly (Michael Sheen) and Lord Thomas Badgley (Jim Broadbent) she is on the road to death not recovery. She sent Lady Rose (Carmel Laniado) from the castle to seek Dr. Dolittle in hopes he could help her but much to her surprise when she arrives she meets a young man Tommy Stubbins (Harry Collett)carrying an injured squirrel, Kevin (voice of Craig Robinson). Both of the children are seeking Dr. Dolittle but when they find him surrounded by his animal friends, Jip (voice of Tom Holland), Chee-Chee (voice of Rami Malek), Poly (voice of Emma Thompson), Yoshi (voice of John Cena) among others but Dolittle is not ready for visitors while living in recluse since the death of his wife Lily (Kasia Smutniak). Yet with a little make-over from his friends Dolittle is on his way to visit the Queen along with his new apprentice Stubbins.

Dolittle understands he needs to find a cure for the Queen along with a journal which belonged to Lily so he sets sail with friends in tow on the same path where his wife disappeared some time ago. On his journey he encounters the Dragon (voice of Frances de la Tour), a warship, whales, Barry the Tiger (voice of Ralph Fiennes) and eventually King Rassouli (Antonio Banderas) Lilly’s father among many other trials and tribulations to get the journal and save the Queen. Albeit in the end Dolittle discovers his true place in the world.

This was a fun film with a good story and some excellent direction. Of course with Downey Jr. running the show the film is truly well down. There are some moments I would have changed but overall this film will surely entertainment the young and even the young at heart. It was some of the best effects by the animal characters I’ve seen in any film giving each and every one of the characters purpose and some humorous or dramatic lines along with their natural sounds as well. It’s a welcoming score with some phenomenal photography and wardrobes and since I’m a huge animal lover I truly recommend this film for all to see especially as a wonderful day to spend with the entire family. I had to screen this at 10am in the morning which was rough for my schedule but through it all I loved it and highly suggest you see it.

More in this category: « Just Mercy Bad Boys for Life »
back to top

We have 352 guests and no members online