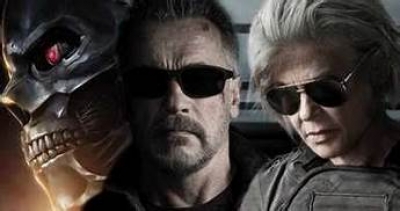 It has been decades since Sarah Connor (Linda Hamilton) has saved the world from Judgement Day and now there is a new person that has become the target of the current new and highly sophisticated Rev-9 Terminator (Gabriel Luna). Dani Ramos (Natalia Reyes) lives in Mexico City with her father Cesar (Diego Marinez) and her brother Diego (Diego Boneta) and both siblings work in the same factory. Meanwhile Grace (Mackenzie Davis) mostly human but extremely mechanically enhanced from previous war wounds has come to earth from the future to protect Dani in hopes of preventing another possibility of the end of the world.

As the Rev-9 tries to kill Dani both women Grace and Sarah are out to protect her. Car chases, running for their lives, gun fights and physical contact the three women are on the run from Mexico to Texas but Rev-9 will stop at nothing until he kills his target. It was Dani that sent Grace from 2042 to protect her knowing that the Rev-9 would also be sent to earth but to kill her. The Legion as the new Terminators are known from must do everything in their power to stop Dani and Sarah, Grace and now Carl the T-800 has come on board much to the hatred of Sarah to destroy the Rev-9.

This film is brilliantly directed and nicely written with many cliché moments but even more original times on the big screen especially with the special effects, the explosions and the enhancements of the new Terminators. I know it mixes up the stories from the older films but so what it is time to change from “I’ll be back” to “I won’t be back”. Of course the film is left with more than an opportunity to keep the franchise alive but like I said this time with all new characters, enhanced robots and hopefully Sarah Connor to stick around. I loved everything about this film which I entered with high expectations and quite frankly they were met.

Hamilton is up in age obviously but she still kicks some ass in this new version of what Terminator has become. The relationship she has with Schwarzenegger is both humorous and dramatic in several ways. I was not sure about Reyes as the lead but she absolutely carries the Terminator torch high and proud. From the leads to the supporting characters with the massive moments of destruction and war scenes this new film may not follow the rules but it is surely entertaining and very well worth the watch on a big screen near you. Taco is in the film but surprisingly this dog seems to get along quite well with Carl and his new family even though he is a Terminator. I loved it.

More in this category: « Pain & Glory Motherless Brooklyn »
back to top

We have 427 guests and no members online