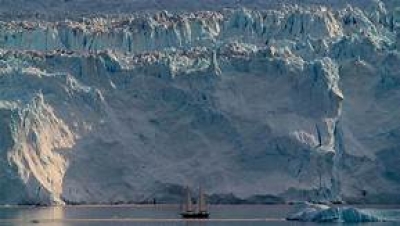 When the film opens the audience is watching several men on ice looking through the ice for something we the audience is not sure of! When we find out what it is they are looking at we discover that the ice is melting at a faster pace than normal, creating a problem for locals.

Cut to huge lands of frozen ice in all its glorious forms breaking off and exploding as it hits the water. Showing ice shapes from scenes both above and below the surface of these gigantic layers of ice. So many different forms of water shot all over the world from Russia, to America to Venezuela but some of the beauty spots in the animal world were the playfulness of whales and the speed of dolphins in the ice cold waters of the ocean.

We set sail on a nice size sail boat only to experience the thrashing of water on the crew as they try to make their way through the torturous waves and wind among a stormy sea. The director cuts to a hurricane hitting Miami and the state of Florida with all its power causing death and destruction in its wake. The visuals of the film from scary to breath-taking are abundant as we watch the waterfalls in Venezuela cascading over the edge of cliffs to the created rivers and streams below.

The director and writers take us on a journey throughout the world of the effects of climate change and the awesomeness of water in all its forms. There are moments on the big screen when I feel like part of the film with no score and no words just the visuals of water as we are taken on an incredible and beautiful journey. There is no narration, very little sub-titles and sometimes no score but when the music kicks in it is deeply dramatic and very loud. The film could use some narration explaining where in the world we are and maybe some statistics of the effects on water in the world from climate change. When the director speeds up some of the camera angles I personally was close to my vertigo kicking in. The cut from some open water to a horse to floods was a bit odd at first but I can see where he was going with it. The film has its beauty and destructive qualities but personally I would have appreciated some facts, locations explained and some less time on the same scenes which makes it seem like the director was just trying to make the film longer otherwise it would have been less than an hour. The meaning is there for the audience to assume for themselves but if you can’t do so then you may be a bit lost on the concept of this film.

More in this category: « Ad Astra Judy »
back to top

We have 97 guests and no members online