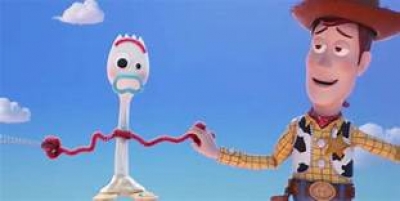 Nine years ago when Woody (voice of Tom Hanks) and the other toys had a boy named Andy (voice of Jack McGraw) life was good even when they had to perform a water rescue on one of the toy cars. The same day that Bo Peep (voice of Annie Potts) and her three sheep (voice of Emily David) were boxed up and sent away. It was a difficult time for Woody more than Bo Peep but both of them hoped one day they would see each other again.

Years have gone by and the toys have a new kid and her name is Bonnie (voice of Madeleine McGraw). She loved to play with the toys but found herself playing more with Jessie (voice of Joan Cusack) than she did Woody and he was beginning to feel unwanted with no purpose. When Bonnie leaves one day for orientation at kindergarten Woody hides away in her backpack. Kids can be unknowingly cruel at times and a scared Bonnie felt all alone in class that is until Woody secretly helps her find her way. In doing so Bonnie excitedly created a new toy and she named him Forky (voice of Tony Hale) a Spork with legs, arms, eyes and a mouth with that of a trashy personality. Yet no matter how often Forky threw himself away Bonnie loved him even more and as usual Woody was there to show Forky the way into a child’s life.

Bonnie’s parents (voice of Jay Hernandez and voice of Lori Alan) are now ready to take a vacation and get away to Carnival Days at Grand Basin RV Park and the toys are going along especially Forky. After some trials and tribulations along the ride the family arrives at the park and Woody who is out and about with Forky finds something familiar in the window at Second Chance Antiques. Yet when he enters he does not find what he thought he would but rather a doll named Gaby Gaby (voice of Christina Hendricks) and her four dummy and scary henchmen who kidnap Forky. Now it once again has become a rescue mission which need be accomplished before Bonnie’s family leaves the park. Luckily Woody has fallen on the help of some old friends and new friends like Giggle McDimples (voice of Ally Maki) the tinniest but well heard woman of the hour, Duke Caboom (voice of Keanu Reeves) the stuntman with all looks no brain, Ducky (voice of Keegan-Michael Key) and his sidekick Bunny (voice of Jordan Peele) both dreamers that are absolutely hysterical all pitching in to help rescue Forky from Gaby Gaby who is holding him because what she wants is something very personal to Woody as a trade.

Bo Peep spent years in the antique store before she branched out into the world as a lost toy having no child but for her and her friends life could not be better. Woody struggles with questions of his purpose and direction in life ahead but finds out like Buzz Lightyear (voice of Tim Allen) one must listen to their inner voice and if you do you just might find yourself no longer lost anymore.

I loved this fourth rendition of Toy Story. It has a great script with some superb direction in the story accompanied by a great score and some of the best animation only Pixar and Disney can supply. All great choices on the cast members and their voices starring in this animated IMAX masterpiece, leaving me to admire not only the old but the new characters as well. I can guarantee you will not be disappointed and even though there is a number of moments that have adult humor your young kids will never even notice anything but humor and one heck of a wonderful journey surrounded by friends and loved ones. Once again a home run for another edition of the Toy Story franchise with more to come I’m sure. No real animals were harmed in this brilliantly produced animated film.

More in this category: « Shaft Yesterday »
back to top

We have 210 guests and no members online