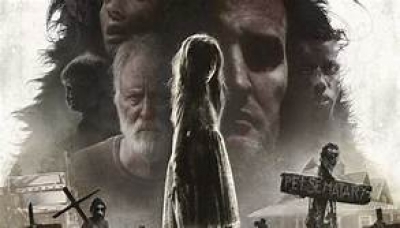 Dr. Louis Creed (Jason Clarke), his wife Rachel (Amy Seimetz) and their two children Ellie (Jete Laurence) and Gage (Hugo and Lucas Lavoie) along with their pet cat Church leave their home in Boston for a beautiful country setting in Maine. A beautiful home, miles of acreage, mostly forest and one nearby neighbor Jud (John Lithgow) are all part of the ambiance of living in the country.

Louis is at work one afternoon when suddenly a young girl covered in blood storms into the medical center, it seems there was a car accident and a young boy named Victor (Obssa Ahmed) was critically injured with most of his face ripped off down to his brain. Something of this magnitude was not expected by Louis and eventually the boy died. Or did he? Louis continually has visions of Victor warning him of what’s coming. One day Church was apparently run over by the speeding trucks that would travel down the road in front of the Creed’s home. Since Jud took a liking to Ellie he figured he would inform Louis of a tribal burial ground on his property passed the pet sematary and beyond the forbidden barrier where if you bury Church the cat will come back to life. Once beautiful and fun to play with Church came back but very different and everyone including Ellie noticed the personality let alone the appearance changes.

Louis tried to eventually kill Church but did not have the heart so he drove the cat into the forest and left it there. But during a birthday party for 9 year old Ellie, Church once again returns walking down the middle of the country road. Both children road out to the road and are standing in the middle until a truck jackknifes causing a child to die. Stricken with grief Rachel and her remaining child go to spend time away with her parents at their home. Yet once again Rachel faces nightmares of her own sister’s death in that house. As for Louis he was able to bring back a cat so what about a child. Sometimes dead is better off dead since after resurrecting his dead child like that of the cat nothing comes back the same. When Rachel shows back up to spend time with her husband the horror has begun and given a second chance at life is not always the best of choices.

The film is very similar to the original which I thought was overall better than this new rendition. By adding a few new twists and turns throughout the story it does mix things up but not enough to make it better in my opinion. Sometimes originals are best to leave alone and this is somewhat of an example. The story starts out a bit slow as the writers take advantage of character development. I almost felt that the first hour of the story falls a bit flat and uneventful but by introducing Rachel’s sister that of the resurrected in the last half hour the direction and acting gets much better.

Clarke does justice to his role as the father stricken by grief and wanting only to bring his child back. Seimetz does justice to her role but not as much as her lead partner Clarke. Lithgow is convincing and I liked his character as the single old man living across the way from the Creed family similar to the original. Laurence I was skeptical about as the normal little girl but later on her new image worked much better for her. Lavoie is not a major character role but so darn cute. As for Ahmed he does well for not saying much but seems to get lost in the story with no explanation really! Although I enjoyed the film it does not stand up to the original yet it was still a good attempt at making you squirm a little in your seat. As for the now generation that have not seen the original they will probably like this rendition of the Stephen King novel.

More in this category: « Storm Boy Shazam! »
back to top

We have 290 guests and no members online