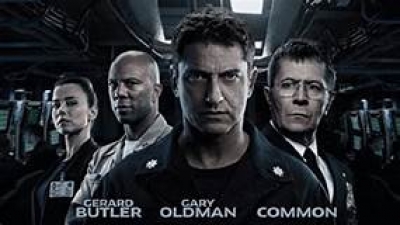 Out in the deep waters of the Barents Sea, Russia, a Russian submarine is sunk as well as the USS Tampa Bay submarine. Nice to have a sub named after my city! At the Pentagon RA John Fisk (Common) is consulting with the President, Military Intelligence Jayne Norquist (Linda Cardellini) and CJCS Charles Donnegan on what to do about the situation. Recommended for a job to rescue any of the 110 men left in the USS Tampa Bay and retrieve or destroy any important information left on the sub the Pentagon calls Captain Joe Glass (Gerard Butler) for the job. Joe just happened to be hunting a big antlered Elk but when he saw behind the male a female with a fawn he lowered his weapon. I loved that moment! Next thing we know Captain Glass is in Scotland getting ready to board the USS Arkansas with a full crew.

When they arrive on the scene they discover that what they thought happened did not happen as they thought. Yet on the Russian ship they discovered someone was still alive. Soon thereafter torpedoes are coming from somewhere and they can’t immediately figure out from where until their radar finally picked up an image. Soon thereafter Captain Glass makes the announcement they are going in to save the stranded Russian crew but what they find are only three men one being Captain Vlade Sutrev (Ilia Volok). Once saved and figuring out what the issue is at the Russian command center they discover that rouge Admiral Dmitri Durov has developed a plot to kidnap President Zakarin (Alexander Diachenko) and create a war with the USA.

With the help of four military Seals who travel on foot to kidnap President Zakarin in order to save his life and their country against a brutal war both the men on land and sea are hopeful to save the President and get him to safety to announce to his country what is really going on. In the end Captain Glass hopes to avert a major war from breaking out between Russia and the USA but the big question is if his new found friends be able to help the possible situation from happening in enough time. One can only hope for the safety of two countries and the entire world.

There are some good hold your breath moments through the story. There is definitely some good direction and writing but the photography and score are absolutely riveting. There are moments when you may think thank God I’m not there at that moment in time. There’s not too many places to run or swim in this case when you ae locked underwater in what could be your coffin. There are some screw up’s like when the four Seals dive out of a plane check out the weather above and below the clouds. Overall though, it is a great testosterone film for men wanting to see a good movie.

Everyone does a great job on this film and it was great to see Butler in a good film again. He sometimes gets the lower end of the stick. Common has been popping up in a lot of films lately and for all good reasons since he is beginning to pull out of acting class 101 for more viable roles. Volok and Diachenko both pull off their roles which I’m sure it helped to be a Russian born actor. The team of four soldiers along with the other supporting staff all bring some great moments to this underwater adventure. Grant it there are some unbelievable moments during the story but thankfully so this film is not real but rather just entertainment. So far!

More in this category: « Mid90s Bohemian Rhapsody »
back to top

We have 180 guests and no members online