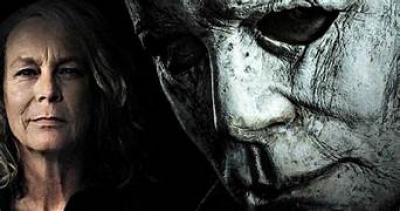 It seems that Michael Myers never dies but has been locked up in a psych ward for 40 years with Dr. Sartain (Haluk Bilginer) taking over for Loomis as his doctor. Two journalists, Dana Haines (Rhian Rees) and Aaron Korey (Jefferson Hall) are doing a podcast story on Michael and Laurie Strode (Jamie Lee Curtis). First stop a visit to Michael on his day out in the sun along with a number of other chained up delusional patients. They try to speak to him but no reaction until Aaron takes out of his bag Michael’s original mask. Still no major reaction by Michael but not to say the other patients did not get a bit crazy. Second stop Laurie’s fortress in the woods. What they ask her to do she will not but not to say she doesn’t have a plan of her own.

Laurie does believe in the Boogie man and because of that she lost the custody of her daughter Karen (Judy Greer) when she was just twelve years old. Now Laurie’s daughter Karen is a mother of a teen daughter named Allyson (Andi Matichak). Laurie believes she is ready to defend herself and protect her family if need be. Well the need is there because during a transfer of Michael and other patients to an alternate hospital something goes wrong and Michael escapes. Let the carnage begin and it does! Michael is truly one big killing machine in Haddonfield Illinois and no one is safe.

I’ll leave my synopsis at that since I’d hate to ruin any of the killings and what happens to Laurie and her family. I must say that hats off to John Carpenter and Janie Lee Curtis for one damn good story. They basically take off many years after the original film by Carpenter. The use of similar scenes taken from all the other Halloween films was perfect. There is perfection in direction, writing, casting and acting. I am a horror freak and I expected this film not to be worthy of Michael’s character but it was better than that it was pure horror with suspense, thrills and nail biting scenes sure to make you scream and jump out of your seats. All of the actors were perfection right down to Oscar (Drew Scheid) a chubby friend of Cameron (Dylan Arnold), Allyson’s boyfriend. I expected a bit less from Jaime Lee Curtis but I was so wrong she really kicked ass now playing the grandmother in a must see rendition to the Halloween franchise. There is gore, struggles to live and some outright carnage but all is done with the horror of realism. The way these people are killed is quite believable unlike so many other horror films. Carpenter and Curtis brought us back in time to Halloween hopefully making us forget all the other films because with this story that is the boogie man. Run!

More in this category: « The Hate U Give Mid90s »
back to top

We have 593 guests and no members online