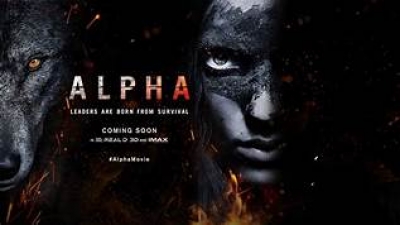 Review written by Jon Patch with 2.5 out of 4 paws

Set in Europe, 20,000 years ago, Keda (Kodi Smit-McPhee) son of Chief Tau (Johannes Haukur Johannesson) has been chosen to prove himself to the tribe so that one day he may lead his people. It is that time of the year that the men go miles out following the path from years past to seek the great beasts for without their meat for the winter their families will not survive. His father tells Keda that life is for the strong and cannot be given but Keda leads more with his heart than with his spear. This could be a problem in showing weakness to the other men on the hunt and in turn that follow his father’s leadership. Like in any pack or tribe an alpha must show his strength, his will to protect his family and have patience to understand good and bad situations.

When the men come upon the great beasts after a very long and treacherous journey not all goes as planned with Keda and he is soon left for dead by his father and the other men to find his way to the spirits. Keda is not dead but rather injured and in a very difficult situation to get out of by any means but he does which is the start of his own journey alone to find home. Surviving on worms and bugs Keda meets his biggest hurdle when attacked by wolves in turn injuring one as the others leave it for dead as well.

As time passes Keda tries to help the wolf eventually giving it the name Alpha nursing himself and his new found friend back to health. A bond does get created between the two as they wonder the wilderness in hopes of getting home before the snow falls. Hyenas, search for food, learning how to hunt to feed himself and Alpha along with Alpha helping to hunt the food the two eventually are well enough to go separate ways. Yet fate has brought them back together again when Keda is in trouble and once again they are both on the path to find his parents. In the end, a boy becomes a man and a wild wolf has shown Keda and his tribe how domestication from the call of the wild becomes reality from that moment on for man and animal.

Personally I loved the film especially the cinematography, the score and the story that involves the domestication of man’s best friend from that of the wild wolf. Smit-McPhee does justice to the role but not perfection actually the wolf seems to be the better of the two yet it doesn’t distract from the beauty and meaning of the film. It is subtitles throughout the entire story but I truly welcomed the change from the typical films to hit the theatres. The direction is well done and at times the story is a bit simple and predictable but the growth of the relationship between Keda and Alpha makes all the difference while watching this movie. There are a number of extras and small supporting roles but it is Smit-McPhee and the wolf that own this film giving it a surprising and very unpredictable ending.

More in this category: « Crazy Rich Asians Kin »
back to top

We have 113 guests and no members online