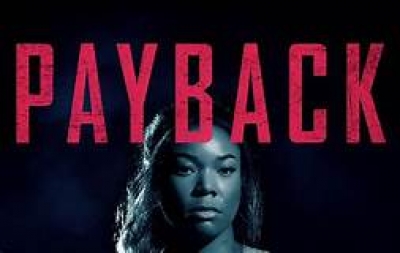 Review written by Jon Patch with 2 out of 4 paws

Universal Pictures, Breaking In Pictures and Will Packer Productions present a PG-13, 88 minute, Thriller, directed by James McTeigue and written by Ryan Engle with a theatre release date of May 11, 2018.

When Shaun Russell’s (Gabrielle Union) father Isaac (Damien Leake) is tragically killed his daughter Shaun and his two grandchildren, Jasmine (Ajiona Alexus) and her younger brother Glover (Seth Carr) set off to the family estate to meet the relator Maggie Harris (Christa Miller) to put the huge property up for sale. Shaun’s husband Justin (Jason George) was stuck in the city on business so Shaun and the kids are on their own for the weekend. That is until they arrive at the property and find that four men have taken over the house, Eddie (Billy Burke), Duncan (Richard Cabral), Sam (Levi Meaden) and Peter (Mark Furze). The home has a full alarm system, state of the art, but that does not stop these criminals from looking for what they want, Isaac’s safe.

In a cat and mouse chase throughout the property mom takes matters in her own hands since her kids are now trapped inside the house with the men. “Mom’s don’t run when their babies are trapped in the nest”. Shaun does not run but rather fights to the bitter end to release her wrath to the ones that have it coming.

There is not a lot of dialogue in this film but rather more so physical combat between Union and her assailants. It has a nice score, is directed well yet has a lack of decent writing at times. The story has been done before so it is a bit cliché and predictable at times but if not for Union the film would have been lost. She is perfection in this role and thankfully makes the film watchable along with Alexus and Burke. Cabral and Meaden would have been better off left on the editing floor but I guess the writers had to fill space! The best scenes in the film would have been great with Burke and Furze battling Union in and out of the house. Carr is sufficient as a young actor but he kind of gets lost in all the commotion and even though Miller has a very small role she brings a bit of anxiety to her scene. The action never stops throughout the film but the bad casting on some actors distract from the good characters too often. As for George who plays Justin her husband they could have left his butt in the city where it belonged since mom had most of the action under control. Where is the guard dog when you need one?

More in this category: « Avengers: Infinity War Life of the Party »
back to top

We have 258 guests and no members online