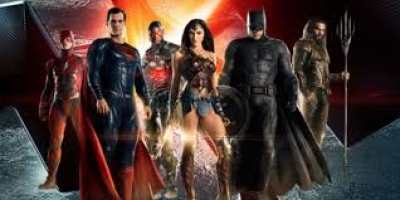 When Batman (Ben Affleck) dandles a criminal from a roof top ledge the man screams what do you want from me as Batman replies fear! It is fear that brings out these bug –like demons, creatures that are soon to take over the world led by the evil Steppenwolf (Ciaran Hinds) who is in search of the three boxes to destroy mankind. These boxes do not contain power but rather they are power and when combined will destroy life as it is known.

Meanwhile Lois Lane (Amy Adams) is grieving the death of Superman (Henry Cavill) and his mother Martha (Diane Lane) has lost her farm to the bank and looks for another place for her and her dog to live.

Terrorists have taken hostages and plan to bomb an entire four blocks of downtown killing everyone within that radius but Wonder Woman (Gal Gadot) appears as a believer to save the day. Batman is aware of an evil coming to take over earth so he with the help of Wonder Woman assembles the ‘Justice League’ to fight evil in the name of good. Batman travels to a remote village where he enlists Aquaman (Jason Momoa) as Wonder Woman works to bring on Victor Stone/Cyborg (Ray Fisher) to join the league. Bruce Wayne makes a stop at the residence of Barry Allen/The Flash and not too much later the young somewhat naïve and a bit immature super-speed man is on board as well. Of course Batman would be nothing without Alfred Pennyworth (Jeremy Irons) who happens to be a super-hero in his own right.

The Amazons hold one box and the Atlantean’s are guarding another but the third box has been hidden where no one can find it, so you think. Steppenwolf and his flying bugs are in battle against the Justice League to retrieve the boxes, combine them and kill everyone. The League is strong but not as strong as they would be if they had Superman. So in a moment from ‘Pet Cemetery’ the man with the red cap is brought back to life but a bit dazed and confused unsure of whose team he is on since his last battle with Batman. In the end heroes emerge from shadows in hopes of joining the league as hope is real and all you have to do is look to the sky. Remember to stay for the entire credits to witness a new league of their own soon to battle yet another day.

I enjoyed this film and found the direction to be done very well but I just thought the writing could have been better. Great score, phenomenal wardrobes and some cool CGI really help this story move from start to finish with only a few moments that I though lagged just a bit. It was definitely better than Batman vs Superman and I enjoyed the new members that were all given some pretty strong character development but I couldn’t help but want just a bit more. I don’t think more in length of the film but more in turns of dialogue between all the super-heroes. The cast is superb so I can’t say anything bad about any of them yet I did like the comedic relief supplied by The Flash. I only wish there was a little more of that mixed in with some of the other characters. Affleck really has come into his own as Batman and Gadot of course has proven Hollywood wrong since she herself has proven her audiences draw. Either way this film has a lot going on, a great cast, a developed story but with a bit of somewhat poor writing at times. Overall I’m sure this film will make a lot of money at the box office.

More in this category: « Murder on the Orient Express Lady Bird »
back to top

We have 117 guests and no members online